Lloyd Marcus
McGinniss book about Palin: yet another attack on America

September 19, 2011
The Joe McGinniss Sarah Palin book "The Rogue" is the left's latest hate letter to God-fearing patriotic Americans. Make no mistake about it, folks. The McGinniss attack, along with the other numerous attacks on Sarah Palin, is really about attacking you — mainstream Americans with traditional values. 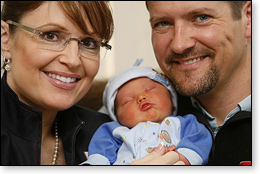 Since her extraordinary, upbeat VP nominee acceptance speech in 2008, I have wondered: What did Palin specifically say to prompt such immediate visceral hatred from the left? I have come to realize the answer is her celebration of God, family, and country.

How dare Palin praise traditional marriage, motherhood, Christianity, and American exceptionalism — all of which are anathema to the left. Thus, the left's hatred of Palin is really hatred of mainstream America, particularly tea party patriots.

That is it in a nutshell and explains why the left so desperately seeks to destroy Palin. They hate America and all who love our extraordinary country.

The left is indoctrinating our kids into believing America is the greatest source of evil in the world; all other religions are superior to Christianity and homosexuality is superior to heterosexuality. During the "Gay Pride Day Celebration" at a middle school, kids were taught to give things a try before deciding whether they like it or not. http://www.youtube.com/watch?v=ZrZJpt-tGxI

Palin in the White House would be a major fly-in-the-ointment toward furthering the left's secular/progressive agenda.

In typical left-wing fashion, McGinniss attacks Palin for her Christian faith and then accuses her of not being Christian enough — thus trying to portray Palin to be a hypocrite. It is pretty obnoxious when godless, liberal, progressive zealots accuse godly people of falling short of Christ's standards. This tactic is satanic and evil.

Even some liberals say the McGinniss Sarah Palin book scrapes the bottom of the barrel of indecency by showcasing undocumented allegations from weak anonymous sources. The McGinniss book is simply another sleazy hit piece to destroy this extraordinary Christian woman who is, to the left's horror, admired and loved by millions.

Like every other attempt to destroy Palin, the McGinniss vile piece of trash will fail. Yes, if you believe the liberal mainstream media, it would appear the left has won the PR battle, convincing folks on both sides of the political aisle that Palin is unelectable.

The Bible speaks of evil appearing to be all powerful, spreading itself like a huge oak tree only to crumble and disappear in an instant. Palin is a Christian. God's Word promises, "No weapon formed against us shall prosper."

Now let me see, whom do I choose to believe, a despicable, ungodly, evil, liberal mainstream media or God?

As I have stated on numerous occasions, the political battle in America today goes beyond Republican vs. Democrat. It is a spiritual battle of good vs. evil, right vs. wrong.

The left is repulsed by all things decent, godly, and patriotic. Palin, like all of us, is far from perfect. However, she still symbolizes goodness and embodies wholesome traditional American principles and values. Thus, the light which emanates from this American icon is as repulsive to the left as showing Dracula the cross.

Mr. McGinniss, you and your fellow progressive Obama minions are pitiful. The Bible, the very book which your side despises, commands that we Christians love and pray for our enemies. Therefore, in obedience, you are in my prayers.

Meanwhile, if Palin throws her hat into the presidential ring, I boldly predict she will win, defeating your socialist/progressive, "Mister-I-Vow-To-Fundamentally-Transform-America" Barack Hussein Obama in a landslide.