September 25, 2011
I preface my following statements regarding Republican presidential candidate Mitt Romney with enthusiastically saying, "ABO, Anybody But Obama." Any Republican is a thousand times better for America than Obama. Obama is an evil, divisive man willing to sacrifice national black/white race relations to further his anti-America socialistic, some say communist, agenda. Gee Lloyd, how do you really feel?

Thus, if Romney wins the Republican nomination, you will hear me singing his praises, "Mitt Romney, he's our man. If Mitt can't do it, no one can! GOOOOO ROMNEY!!!" 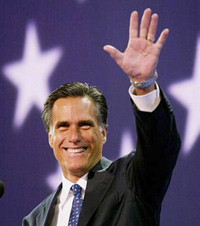 Now that I have that out of the way, here is what happened at our Tea Party Express V national bus tour rally in Romney country, Concord, NH.

Mitt Romney was the featured presidential candidate at that particular rally. The majority of the audience were Romney supporters, evidenced by the sea of t-shirts bearing his name.

Participating on 5 previous tours, this tour marked tea party rally number 301 for me. My signature opening statement always garners a powerful emotional and loud response from audiences, "Hello, my fellow PATRIOTS! I am NOT an African-American. I am Lloyd Marcus...AMERICANNNN!"

A few in the Romney audience cheered, but the majority smiled politely. Some even appeared to have a puzzled look on their faces. I was taken back a bit. I thought, "Is my fly down? What is wrong? Why are these folks so unresponsive?" Still, I am a professional and pressed forward singing my "American Tea Party Anthem."

My "American Tea Party Anthem" speaks to Obama's failed stimulus and his despicable false charges of racism against the Tea Party. The lyrics of the song and my passionate performance are always a crowd-pleaser, winning enthusiastic applause. The Romney audience smiled and offered polite applause.

Back on the Tea Party Express bus headed to our next rally in a different state, some on our team were baffled. Why was the response to our presentation at this tea party rally so uniquely lukewarm? Also, after Romney completed his stump speech, the majority of the crowd left in the middle of the tea party rally.

Then, it dawned on me, the majority of the audience were Romney supporters, not particularly tea party supporters.

Our in-your-face, Obama-must-go approach was probably uncomfortable for them.

Mary Kay Ash of Mary Kay Cosmetics fame said, "The speed of the leader is the speed of the gang." I believe Romney supporters' lukewarm response to our presentation reflects his attitude regarding the tea party and our principles.

It confirms "to me" that Mitt Romney is an establishment moderate Republican — willing to date and even have a live in relationship with the Tea Party, but not committed enough to marry the Tea Party.

A friend said it is unfair to judge Romney by his fans. Keep in mind that I have attended 300 tea parties nationwide. Some audiences in small towns, despite being extremely appreciative, were subdued because they are not super expressive. But, the Romney audience was unique, as if we were not on the same page.

I thought about how gangsta rap concerts always attract potentially unruly violent audiences. My brother David loves country music. David and his girlfriend attended a huge country music concert at the Baltimore Civic Center. He was struck by the peaceful nature of the crowd. David said people were drinking and having a good time and yet he did not see one confrontation or arrest — quite a contrast from the typical news reports of violence after a major gangsta rap concert in the same venue. Without question, the headliner attracts a certain type of audience.

I have appeared on the program of several rallies with Sarah Palin. Every Palin audience has been upbeat and enthusiastically patriotic.

Please do not think I am picking on Romney. John McCain was a disaster. To select another moderate as our presidential nominee will insure the re-election of Obama, ending America as we know it. Regardless of how moderate/liberal our nominee, the liberal media will portray him/her as a far-right nut cause. So, let's select a true conservative.

Still, I would work tirelessly to install Mitt Romney in the White House if it came down to Romney or Obama.