October 17, 2011
For years, I have been impressed with this young man I see working at Walmart retrieving shopping carts in the parking lot. He is challenged, I suspect from birth, with physical issues involving an arm and a leg. I saw him leaving work one evening in his car. While I do not know his living situation, I do know he has a job and drives what I assume is his own car.

Looking at this young man hobbling around doing his job, one could think, "Why isn't this poor soul home collecting disability?" He obviously prefers the dignity which accompanies earning his own money. Thus, the reason for my utmost respect for him.

Then, I look at the Occupy Wall Street despicable mobs — spoiled-brat college students, America-hating Marxists, paid professional protesters, and plain old lazy bottom feeders, all demanding freebies while claiming ownership of the fruit of other folks' labor. And the left expects me to respect and sympathize with these parasites.

The liberal media, the left, and the Obama administration are trying to convince us these ignorant, arrogant Occupy Wall Street knuckleheads represent the thinking of most Americans. If their premise were true, we would be in deep, deep trouble as a nation. Fortunately, these mobs are NOT a majority.

Like parents who are in denial protecting a juvenile delinquent child, the left is doing everything in their power to portray these violent, destructive, anti-Semitic and ungodly Occupy Wall Street thugs in a positive light. Meanwhile, the left remains relentless in their quest to slander the tea party with false, undocumented accusations of racism and violence.

The Tea Party movement, which is driven by "We The People," is the polar opposite of the George Soros, far-left organizations-funded Occupy Wall Street assault on Capitalism and America. How dare they compare their low-rent "trashy movement" to the dignified Tea Party.

As a Tea Party activist/performer who has traveled on five Tea Party Express national bus tours, I have attended over 300 tea parties. I can assure you the well-informed, hard working, and decent people who attend tea parties represent the thinking of a majority of Americans, not the Occupy Wall Street mobs.

While Occupy Wall Street participants trash, vandalize and disrespect public parks and government buildings, we tea party patriots leave our rally sites the way we found them or cleaner. The Tea Party is inspired by love for America and a desire to follow our Constitution. It is also in rebellion against political correctness, and about restoring values and principles that have made America great. Tea Party goals are far superior to Occupy Wall Street, which proclaims, "You rich guys have too much and we're takin' it!"

You Occupy losers need to get a clue, a life, and a job! 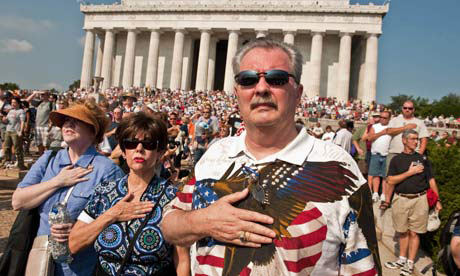