January 2, 2012
Six months ago, I returned home to discover a family had moved into my backyard storage shed. Displaying an incredible sense of entitlement and off the chain arrogance, the family refused to leave, arguing they were simply seeking a better life. Adding insult to injury, their TV, computers and etc were powered by an electrical cord plugged into the exterior outlet of my home. 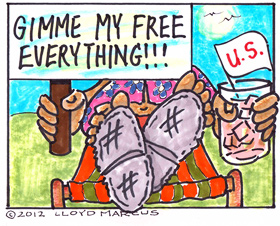 Infuriated, I immediately sought help from law enforcement to remove the squatters from my property. After inquiring about the race of my intruders, law enforcement accused me of racism. Law enforcement declined to assist me. I yelled, "These people are breaking the law! What about my rights as a property owner?"

Law Enforcement scolded me, "Don't try to hide your racism behind the law!"

I returned home frustrated to witness more of the trespasser's family and friends setting up residency in my backyard. One invader brought an old piece of crap RV. My Home Owner's Association is fining me daily until its removal. There are tents and people living in an old Chevy station-wagon; all powered by a dangerous poor imitation of a MacGyver style electrical hookup into my power including a maze of electrical cords.

To stop further invasion, armed buddies volunteered to secure my fence, take turns keeping watch. Local media caught wind of my buddies sympathetic generous offer and branded them an angry racist mob of vigilantes. Law enforcement threatened my buddies with arrests if they intervened in any way.

With city elections only a few months away, the mayor showed up at my home with fruit baskets for the invaders. His honor assured the invaders that he supported their honorable pursuit of a better life 100% and would not tolerate the "racist" property owner (me), evicting them. After the thunderous applause subsided, the mayor's assistant made sure each invader filled out a voter registration form which he collected before the mayor and his entourage departed.

So, here I am. My monthly electric bill has tripled. Cited for code violations, I was forced to install more outlets and electrical power. My backyard landscape with my wife's prize-winning flower garden is now a mud-pit resembling a scene from the movie, "Woodstock." Invaders now occupy every inch of our exterior property.

Local media continually write stories about what a cruel, heartless, evil and racist SOB I am for not providing food for my "guests" and adding them to my health insurance.

Upon returning home from school, we keep our kids in the house. Our neighborhood has become unsafe and in rapid decline; selling drugs and lord knows what illegal activities are taking place in our backyard.

The Home Owner's Association sent a petition to the city demanding they do something to stop the invasion spreading all over our community. In response, the city is suing us. The local media has joined the city in their effort to portray us as racists who are somehow breaking the law.

Unbelievably, to assist the invaders, the city has raised our taxes to provide by-lingual signage throughout our community, food, education and health care for our "guests."

Please understand. Our history of swiftly coming to the aid of people in need around the world confirms that my neighbors and I are a charitable, generous and compassionate people. Thus, we wholeheartedly support anyone seeking a better life.

But, there is a right and wrong way of doing things. An illegal invasion is not the correct way. It is also immoral to send a message that it is acceptable to break our laws; a slap in the face to all who play by the rules.

What happened to "equal justice for all"? Law enforcement and government lending a deaf ear to lawbreakers for political reasons is the worse kind of corruption. Their motives are not about compassion, but rather securing potential new voters. Such a self-serving exploitation of power is shameful, despicable and ugly. How can my city, with a straight face, instruct kids to obey the law and not sell drugs when the city decides to enforce laws based on their agenda or the race of the offender?

Got to run, the Spot-O-Potty delivery guys have arrived. Yes, it is another expense, but it is worth it.