January 15, 2012
Denver Broncos rookie quarterback Tim Tebow is an unapologetic, outspoken born-again Christian. No politically correct, careful not to offend anyone, skirting around the issue of his faith for Tebow. When interviewed after winning a game, Tebow says, "First, I would like to thank my Lord and Savior Jesus Christ." 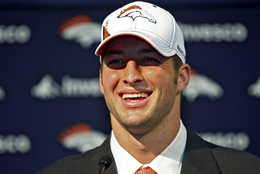 Numerous pro athletes are Christians. None have been so innocently bold about expressing their faith as Tebow. It is as if when Tebow entered the national stage, he never got the memo sent by the left stating that God is banned from the public square, and anyone who dares speak of God will be branded a religious nutcase. Tebow simply loves Jesus and sees no reason to hide it. Thus, the left hopes that Tebow fails as a quarterback and a role model.

Oh, I just got a thought. Wouldn't the mainstream media be celebrating and rallying around Tebow if he proclaimed that he was in love with and planned to marry a fellow teammate? Imagine the major TV network bidding war for the rights to broadcast the wedding nationwide.

Meanwhile, the left has deemed Tebow proclaiming his love for Jesus offensive. A blogger called Tebow the most polarizing figure in America. Several TV shows promote homosexuality. Another TV show promotes Islam. And yet, Tebow mentioning Jesus is considered polarizing.

Tebow is not polarizing/dividing people. Tebow is bringing people together. Remarkably, Tebow fans are all races, ranging in ages from eight to eighty.

Folks, I am telling you. There is something uniquely special about this fine young man, Tim Tebow. Cultural rot is eating away at our country like a terminal cancer. Our boys aspire to look and act like thugs. Women are dressing themselves and their daughters without modesty.

Unintentionally and, I believe, unknown to him, Tebow appears to be leading a movement toward a miracle cure: returning Christian values and principles from many years of exile. More and more pro athletes and politicians are boldly speaking about their faith on national TV. We are witnessing the birth of The Tebow Effect.

Tebow is making it cool to be a "good guy" again. He has sparked a national dialog in the secular arena regarding faith.

Christian broadcasting networks do a wonderful job. But rarely these days do we see anyone speak as comfortably and as matter-of-factly about his faith as Tebow in "secular" settings. Tebow is not trying to start a movement, nor is he trying to offend. The kid is simply being himself, and people are following his example.

God is so awesomely cool. The Bible says God uses the foolish things of this world to confound the wise. Who could have imagined that God would use something as foolish as a twenty-something-year-old kid, playing football, having fun, and being himself, to inspire millions?

Tragically, many Americans have accepted incidents of terminating a sixty-year tradition of opening their town's spring festival or city council meeting with prayer because one person complained. Many have accepted their children being forced to say "happy winter break" because "Christmas" is declared to have offensive religious connotations. At secular events where prayer is allowed, clergy are cautioned to refrain from using the name of Jesus for fear of offending someone. Yes, the left has done a pretty good job of intimidating Christians into not honoring Jesus in secular settings.

Then, along comes this superstar football player cheerfully spouting the name of Jesus all over the place. The anti-Christian crowd who thought they had us Christians securely under their thumb are furious. Who does this Tebow guy think he is, and does he know the rules?

I believe that Tebow is passively leading us back to a time when all things Christian were not attacked, demeaned, ridiculed, or made fun of. Many years ago, secular companies produced movies like Boys Town, in which Father Flanagan was the hero. Nowadays, though, can you name a recent movie produced by a secular company which features Christians in a positive light? Remember the grief Mel Gibson caught from the anti-Christian community for following the biblical account of events in producing his movie, The Passion of The Christ?

When I was a kid, my family loved watching the Red Skelton TV comedy show. Skelton would end every show saying, "Good night and may God bless." Today, letters from a few non-Christians claiming to be offended would prompt the show producers to instruct Skelton to cease ending his show with a "prayer."

Tebow represents a paradigm change — a new sense of freedom to say "Praise God!" in secular settings. I love it!