May 10, 2012
A big well dressed black guy attended the Dallas, TX tea party rally with his white buddy. Both men missed my singing performance on stage minutes earlier. I asked the black gentleman who had an impressive physique how often he worked out. He replied, "Everyday." His white buddy said with a chuckle, "He thinks the Tea Party is racist." 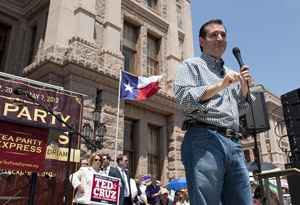 I went into explaining to the black man that these people could not care less about Obama's skin-color. They, along with me, disapprove of what Obama is doing — his policies. I gave a brief laundry list of things Obama is doing which go against what I believe to be right as an American and a Christian. The black gentleman silently listened. I gave him my business card and encouraged him to visit my website. LloydMarcus.com

But folks, I must be honest. I felt annoyed. This black man came to the rally with his white friend. They were surrounded by people waving American flags, laughing, smiling and cheering in response to various inspiring statements from the speaker on stage, Mr. Rafael Cruz whose son Ted Cruz is running for U.S. Senate. votetedcruz.org The senior Mr Cruz legally immigrated to America in his youth. He spoke of all the wonderful freedom, liberty and opportunity he found in America. There was not the slightest hint of hate in the air; only a cool refreshing breeze of love in the air for America, the greatest land of opportunity on the planet.

I thought, what gives this black guy the right to stand in the midst of this crowd of patriots and call them racists? Why was the burden on us to convince a black racist, this was not a racist gathering? Granted, he and I were the only blacks in attendance at the rally. But again, why was that the fault of the Tea Party? I wanted to say, "Dude, can't you see you're the one being racist?"

Despite feeling annoyed, I nurtured the black man. I explained that I subscribe to a higher standard which would never allow me to support a candidate solely because we shared the same skin color. I asked, "Don't you see how wrong that would be?" He did not respond, but simply looked at me as if I were insane. It was as if I was speaking a foreign language he did not understand or offering an incomprehensible bizarre concept.

I continued observing the rally from inside the Tea Party Express tour bus which was parked behind the stage serving as a backdrop. And there he was, the muscular tall well dressed black man who stood out in the white and Hispanic crowd. He stayed until the end — our grand finale military tribute.