Lloyd Marcus
Can one be truly black and patriotic?

May 30, 2012
Famed TV minster Bishop T. D. Jakes said when your "perception is off," you do not realize or appreciate the true value of what you have until you have lost it. Is it fair to say that, in general, black America's perception is off regarding their country which is, in reality, a tremendous gift from God? 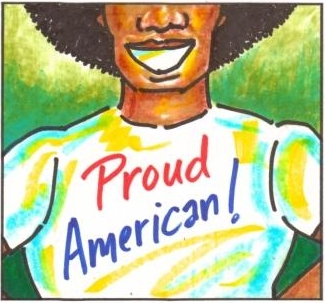 Some may think me insane for suggesting that it was a blessing for my ancestors to be betrayed by fellow blacks, sold to white slave traders, separated from their families and shipped to a strange land to be slaves. But please, hear me out.

Interestingly, black America's journey to fulfill their destiny parallels with that of Joseph in the Bible. Joseph was betrayed by his brothers, separated from everything he held dear, sold into slavery and taken to a strange land. While the Bible says Joseph had great favor with God, Joseph suffered greatly including spending 13 years in prison for a crime of which he was innocent.

Through a series of divinely orchestrated events, remarkably, Joseph became a ruler of the very land which once enslaved and unfairly imprisoned him. Joseph was second in command to the King. Here is what the Bible says about Joseph brothers' betrayal, "They meant it for evil, but God meant it for good."

We black Americans were betrayed by our African ancestral brothers. They meant it for evil, but God meant it for good.

And yes, blacks have suffered greatly in America. My 84 year old dad's heart still bears deep scares from racism he experienced in his youth. When dad was a young Merchant Marine, while on shore-leave down in the south, whites tried to lynch my dad solely because he was "colored." Dad's white fellow shipmates rescued him, saving his life.

A point which is often overlooked and deliberately ignored by the Race Industry is that God has always provided a remnant of good, decent, mostly Christian white people to assist blacks in their struggle for liberation and equality.

The Race Industry which is for the most part fueled by the Democratic Party would have you believe all black progress in America has been achieved in-spite of and void of any assistance from white America.

While in reality, white Americans have assisted in every major black achievement. Blacks are only 12% of the population. Therefore, Obama could not have been elected without millions of white votes. Oprah would not be "Oprah" had she not been embraced by millions of white viewers.

American blacks are tremendously blessed to live in the greatest land of opportunity on the planet — for all who choose to go for it! And yet, I sense that most blacks consider it somewhat traitorous to their race to be patriotic. They possess an extremely tragic and destructive false perception of their country.

Black America, this is your country! A lot of white folks died along side blacks to give you the freedoms, opportunity and prosperity you enjoy today. During the Civil War 330,000 white and 30,000 black Union troops paid the ultimate sacrifice to end slavery. http://answers.yahoo.com/question/index?qid=20100604090718AAieSKA

During slavery, it was illegal to teach blacks to read. Still, white Christians taught blacks to read the Bible. It has been said that white slave owners also gave blacks Bibles to keep them in check; referring to the scripture, "Servants obey your masters." I say, they meant it for evil, but God meant it for good.

Here is my response to Rev. Wright.

Tell me another country where a black kid from the hood who uses deplorable English, profane language, demeans women, calls for violence against the police, wears his pants down below his butt and raps about how racist America sucks for blacks, can become a ga-zillionaire; critically acclaimed by sycophant whites in the music industry.

What burdens my heart is that it appears the Race Industry has been successful in creating a "false perception of America" in the hearts and minds of many black Americans.

White Christians, you have had our backs in the past. I pray that you will come to our aid once again. Please pray for Black America. Pray that their eyes be opened to see the greatness of America — God's wonderful gift to them. I pray that many more of my fellow blacks will boldly and sincerely join me in saying with great pride, I am an American!