August 12, 2012
Some pundits say Obama has so successfully transformed America into a "gimme society" that the food stamp president will win reelection in a landslide. Other political wizards say the bloom is off the rose. A majority of Americans realize that Obama is a far left, radical, socialist/progressive, anti-American, lawless dictator. His reign of terror will end come November. Arguments are strong supporting both scenarios.

Folks, candidly, I do not know which political egghead's election predictions are correct. Life has taught me never to invest total trust in my knowledge or in that of any man. 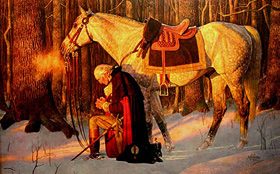 So yes, Obama appears to be doing a great job rallying his base: the lazy, racists, entitlement-minded socialists, the progressives and plain old haters of America. And yes, Obama does own the mainstream media.

Nevertheless, I am confident and strong. What is my response to all the odds appearing overwhelmingly in Obama's favor? Two words: "But God..."

I realize some on our side get the heebie-jee-bies whenever the "G" word is brought into the mix. This is a sad commentary to the effectiveness of the left's relentless campaign to ban God from the public square. America was founded on God and godly principles.

Without going into a lengthy personal testimony, I will say countless times, when it appeared all hope was lost, God intervened and turned things around in my favor. My future looked dark. "But God..."

Benjamin Franklin said, "God governs in the affairs of man." History documents many incidences when America was on the verge of receiving a death-blow, foiled by divine intervention.

The Battle of Long Island was decided by sudden mysterious fog.

In August 1776, with the water full of British warships, George Washington and his Continental Army faced certain defeat by the British in New York City. Besides being extremely outnumbered, Washington's troops were freezing and starving. Adding insult to injury, unseasonable bad weather moved in and it was raining.

The rain turned out to be an extraordinary blessing in disguise. The next morning it was so blindingly foggy that the Brits could not attack. They were forced to wait until the fog passed. Even more freaky is that the fog only appeared in areas in which it was needed to conceal Washington's operations from the British. Remarkably, other areas of New York City were perfectly clear.

The fog provided Washington enough cover and time to slip his army to Manhattan without losing a single troop. Washington did not have to fight the British that day. He eventually won the war.

The Brits appeared to have the battle against America all sewn up. "But God..."

Patriots, like you, my heart aches for America. Unbelievably, the mayors of two major cities threatened to punish a restaurant chain if it attempted to do business in their towns because the CEO is a Christian who does not embrace same sex marriage.

A Supreme Court justice bent the Constitution to uphold the greatest attack on freedom in American history, essentially sealing the death of America as intended by God and our Founding Fathers.

Religious institutions are decreed to fund contraceptive services against their faith or suffer the wrath and iron fist of Obama.

Public schools are indoctrinating our children, beginning in elementary school, to believe that homosexuality is normal — no different than being born left handed. http://www.homegriddle.com/2012/02/graphic-video-planned-parenthood-makes.html

Outrageously, our kids are even encouraged to give homosexuality a try before deciding their sexuality.

I find it particularly disturbing that what it means to be an American continues to be diminished. Our parent's legacy of hard-work, individuality and independence is being suppressed. Americanism under Obama means as many people as possible dependent on government. Forget striving to be all-you-can-be; forget pursuing the American dream for you and your family. The message of our socialist dictator is work to share everything equally.

Meanwhile, many Christians are either not interested in voting or refuse to vote for a candidate less perfect than Jesus Christ. To win approval from the left, some Christians caution their brethren not to be too outspoken regarding their faith like that embarrassing Tim Tebow.

Still, I remain vigilant in my quest to defeat Obama."All that's necessary for the forces of evil to win in the world is for enough good men to do nothing." Edmund Burke

At dinner, a patriot asked, "Mr. Marcus, do you ever get depressed about our country." I could, very easily. "But God..."