September 22, 2012
I am on the road touring with Tea Party Express. In my hotel room, I caught an interview with first lady Michelle Obama on "Lift Every Voice," a faith-based program on BET (Black Entertainment Television). I was amazed at how the black host and program producers portrayed Mrs. Obama and her husband as the couple they want to believe them to be — that is, strongly committed Christians.

In reality, Obama is the most anti-Christian president in U.S. History. http://www.theblaze.com/stories/barton-calls-obama-americas-most-biblically-hostile-u-s-president/ Obama's behavior is irrelevant to the TV program producers. I felt like I was watching an episode of the Twilight Zone in which everything was the opposite of reality. 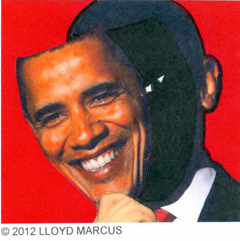 What on earth is going on in the hearts and minds of most black Americans in regard to Obama? Why are a majority of blacks apparently incapable of honestly accessing President Obama's job performance?

In past articles, I blamed The Black Code (never side with whites against a fellow black) and plain old basic black racism for black America's blind loyalty to Obama. However, I must confess that I find myself wondering if something more sinister figures into the mix; a spiritual thing.

The Bible says, "For we wrestle not against flesh and blood, but against principalities, against powers, against the rulers of the darkness of this world, against spiritual wickedness in high places."

Is black America bewitched by Obama? Frankly, I do not know. All I know is something really strange is going on in the psyche of many of my fellow blacks regarding Obama, making it impossible for them to honestly critique his job performance or who he is as a person.

For example: A black Christian minister friend is a hard-core liberal Democrat. And yet, he voted for George W. Bush in protest of the Democrats embracing the homosexual agenda. I informed my friend that along with supporting same-sex marriage, Obama has pledged to be an advocate for the gay, lesbian, bisexual and transgender communities. Knowing that my Christian friend is pro-life, I informed him that not only does Obama support abortion, he supports infanticide. And finally, I shared how 40 Catholic organizations are suing the Obama administration for mandating in Obamacare that Christian institutions fund abortion services.

One would assume that since my friend voted against his party in favor of Christian principles in the past, he would most assuredly vote against them again, given their extreme anti-Christian agenda. Wrong. My black Christian friend is voting for Obama, again.

Here are excerpts from his reply: "I will point out that Bush was supposed to advocate and make laws to stop these things. I voted for him to do so; he didn't. The issues now are more crucial than the issues identified by you; and while I have not deviated from my stance against these things you name I am force to choose between the lesser of evils. I will assure you that voting for Romney/Ryan will not change these situations any more than voting for Bush did (plus Ryan lied so much even Fox News had to dis him). What will happen however will be that Republican economic principles will hurl us into a worldwide depression so deep it will destroy the world economy as we know it and I add before its time.

He is a president controlled — as every president has been — by powers beyond his power to control from a figurehead position (money rules our political system). This nation will be judged for what its leaders have allowed and I recognized that there are no clean hands here even the ones screaming Christ Our Lord from every campaign perch and every so-called Christian pulpit."

While dressing his racism up in a nice intellectual well-reasoned-sounding package, clearly, my friend has sold his soul to the devil of skin-color.

So, according to this black minister of God, sacrificing the lives of innocent babies and ignoring the Bible's opposition to homosexual marriage are lesser evils than allowing Romney/Ryan to win the White House. Dear Lord!

Mitt Romney will defeat Barack Obama in November. America will begin to heal, and we will have another black president someday.

But, what about Obama's legacy in regards to how his presidency impacted black America? Will Obama leave blacks striving for the highest ideals as did MLK? Unfortunately not. Obama will leave office with blacks behaving at their monolithic worse; voting skin-color over innocent life, national security, the economy and even their once sacred relationship with Christ.

Black America stooped this low once before with their monolithic celebration of OJ Simpson getting away with practically beheading his wife, the mother of his children. But then, she was white.

I am confident that black America will eventually recover from the stains on its character resulting from its shameful, monolithic racist behavior, rallying around the unworthy likes of OJ and Barack Obama.

America desperately longs for a "true leader" to bring us together as a nation. This person's gender and race are irrelevant. What matters most is his or her character.