February 3, 2014
Remember that spiky-haired blonde lady fitness guru all over TV years ago? Her famous line was "Stop the insanity!" As a common sense thinking black conservative, I offer the same clarion call to fellow black Americans, "Stop the insanity!" Why do you continue sleeping with the enemy; voting for liberal Democrats whose policies imply that you are inferior, stupid and culturally immoral? 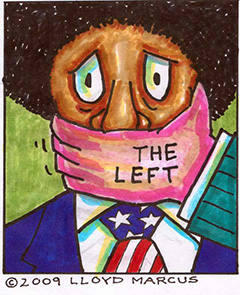 When the NAACP and Democrats claim that requiring a photo ID disenfranchises blacks, such implies we are stupid. For the life of me I do not understand why millions of blacks are not highly insulted by this absurd claim. Do blacks fly? Do blacks drive cars? Do blacks cash checks?

When Democrats and liberals accept over 70% out-of-wedlock births and fatherless households as a cultural norm in the black community, I am offended. http://bit.ly/1fo1iLd And yet, I am called a sellout.

Liberal Democrats policies and programs have destroyed the black family and continue to devastate the black community. Meanwhile, blacks vote monolithic for Democrats and politically beat up anyone, black or white, who offers common sense solutions. For crying out loud, stop the insanity!

God forbid that a black person dare to think outside of the liberals' we-be-simpleminded-blacks-in-need-of "gov-ment"-intervention-to-survive box. Blacks becoming successful the old fashion way, by earning it, does not cut it with Democrats and liberals. Liberal media and Democrats grab such uppity blacks by their afros and politically drag their black derrieres kicking and screaming back to the liberal Democrat plantation.

There, such blacks are strung up in the public square with their naked backs exposed; made an example for any other conservative leaning blacks contemplating their escape. Beaten, battered and broken black conservatives are flogged within an inch of their political life with countless articles and operative pundits calling them a stupid n*****, Uncle Tom and traitor to their race.

Senator Scott is about applying common sense solutions to issues plaguing our country. Thus, once again, any black who does not view themselves as a victim of an eternally racist white America, entitled and in need of lowered standards and expectations is a dummy; a tool of white Republicans – a stupid self-loathing n*****. This is not an exaggeration.

I have been called these names and worse by Democrats and liberals for many years every time I suggest that blacks stop having babies out of wedlock, stop dropping out of school, stopping killing each other, stop blaming whitey and assume personal responsibility for their lives. Too me, this is true Black Empowerment.

I do not know what it is going to take for black America to see the light; to realize the betrayal of a majority of the modern civil rights coalition. If these so-called advocates truly gave a hoot about blacks, they would celebrate extraordinary black conservative achievers such as former Secretary of State Condoleezza Rice, Supreme Court Justice Clarence Thomas and businessman extraordinaire Herman Cain. These blacks should be held high for black youths to see what can be achieved in the greatest land of opportunity on the planet via education, hard work and right choices.

And yet, these blacks are despised by white liberals and black civil rights leaders. Why? In a nutshell these blacks nuke the Democrats and liberals entitlement and big government narrative.

So while black America believes white conservative Republicans are burning the midnight oil plotting ways to keep blacks down, Democrats and liberals are the ones keeping them enslaved.

With the liberal mainstream media in the Democrats' back pocket as complicit liberal plantation gate keepers, I will continue praying for divine intervention while pounding on the plantation master's door. Let my people go! My fellow black Americans, it truly is time to stop the insanity.