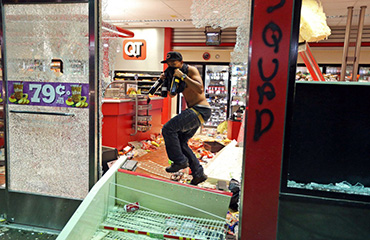 Mary and I were driving home to Florida from working on the Joe Carr campaign in Tennessee when I heard the report on the radio. "Unarmed black youth shot by police."

Why did the reporter think it relevant to mention the race of the youth shot by police in the St Louis suburb of Ferguson, Missouri? Police shooting an unarmed youth is compelling without the racial component.

When blacks commit crimes, the mainstream media bends over backwards to avoid mentioning the criminals' race. For example. When flash mobs were breaking out across America committing crimes of violence, looting and vandalism, the MSM refused to report that the perpetrators were black youths. The MSM's excuse is reporting the race of criminals is unnecessarily provocative.

So why does the MSM not apply the same logic and caution in cases where the alleged attacker is white? Remember how quick and eager the MSM was to convict George Zimmerman in the court of public opinion?

To push its racist-white-man-shoots-unarmed-angelic-black-boy story line, the MSM referred to Zimmerman as a "white Hispanic." They flooded TV with photographs of a much younger Trayvon Martin including one of him in his little league football uniform. The MSM did everything in its power to hide the truth that Martin was a 17 year old thug. A major broadcast network even doctored audio to portray Zimmerman as a racist.

Obviously, the MSM wanted racial turmoil, division and riots in the streets. The Left's bible, "Rules for Radials" by Saul Alinsky says they win by creating chaos.

The mainstream media is fully committed to helping Obama implement his socialist/progressive agenda. Promoting the false narrative that America is a racist nation is extremely helpful to Obama's purpose.

The MSM has been complicit in assisting the Democrats' efforts to exploit Obama's race to silence opposition to his unprecedented dictatorship.

The MSM jumps on every opportunity to further the big lie that blacks are victims of an eternally racist America. The big lie feeds white guilt, making them more receptive to the government redistributing wealth and pandering to minorities. The big lie also inspires blacks to hate successful whites, inspires violence against whites and creates an entitlement mindset in blacks.

During the Trayvon Martin trial, Leftists were all over TV promoting the big lie that black males are routinely attacked and murdered by whites in America. Their claim is totally absurd. The facts prove quite the opposite. Statistics confirm that blacks kill blacks and black attacks against whites are 39 times more likely than vice versa. http://exm.nr/1vClwx5

Please note that this article is not about the shooting. I am merely pointing out the mainstream media's agenda driven reporting of the incident.

Once again, the MSM has successfully ginned up racial hate, division and riots in the streets.