January 27, 2015
Sarah Palin saying "Of course" she's interested regarding running for the presidency in 2016 has people buzzing. http://abcn.ws/1xPVFhj During that interview, Palin said we need a candidate who is ready for Hillary. I agree. Romney would be Mr. Nice Guy/gentleman unwilling to attack the girl. 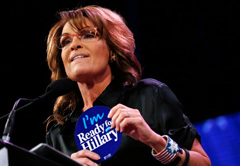 As for Palin running, a woman wrote: "I have never given up on her (Sarah Palin). I am sooooooo hoping that she will be our spokesperson. My husband says the press and Obama have tainted her so much that it would be impossible for her to run. I say that 'with God, all things are possible."

To this woman, I say, "Right on sister!" No offense to her husband, but I find his mindset frustrating. We complain that there are far too few politicians with the cojones to push back against Obama's unprecedented arrogance, lawlessness and tyranny. Despite their newly acquired control over the House and Senate, the GOP appears to be attempting to pull the wool over our eyes regarding amnesty. In their Spanish response to Obama's SOTU, the GOP brought up immigration, desiring to "create permanent solutions" without mentioning immigration in the English version. What is up with that? http://bit.ly/1yWGNjU

So tell me folks, how many politicians on our side truly are who they say they are; standing up for our principles and values – fighting for freedom and the Constitution? We lament that many politicians on our side are obsessed with winning an approving pat on the head from the MSM; reduced to political impotence. Oh if only there was a little blue pill for dis-functioning Republicans/conservatives.

Palin has proven that she does not give a rat's derriere about what the MSM thinks of her. We pray for a voice on the big stage with the guts to stand up for Conservatism.

Sarah Palin fills the bill in spades; one of the few unafraid to get into Obama's grill. I love it!Unapologetic to the Left (Democrats, Hollywood and MSM) Palin's attitude is, "Say it loud. I'm conservative and proud."

Not too long ago, a conservative savior arrived on the seen, exciting and inspiring millions. I remember being on the Tea Party Express national tour bus. We kicked off the tour in a dust bowl, Searchlight, NV with Sarah Palin as our headliner. Twenty five thousand people showed up, many camping out days ahead to reserve their spot. I witnessed the moving scene of seniors who had to park almost a mile away approaching the event using walkers; all coming to see their Sarah.

The Left launched an over the top viscous shock and awe champion to crucify Sarah Palin, her family and her disciples. When the Left sought after Palin supporters, sadly, many cowardly said, "I never knew her." There is something deja vu about this scenario.

So, Palin courageously comes along and does everything patriots have been longing and praying for someone to do. Her reward is patriots distancing themselves from her. Classy. Real classy.

Since taking the national political stage by storm with her amazing VP nominee acceptance speech, the Left as gone crazy, insane with pure unadulterated hatred for Sarah Palin; no attack was too evil or too low. Every Palin family member was in-play including Trig Palin, her Down Syndrome child. http://bit.ly/1BTSIQc

Intellectually challenged actress Pamela Anderson said, "I can't stand her. She can suck it!" http://bit.ly/1p3IlBB

Obama supporters showed up at Palin events wearing t-shirts which read, "Sarah Palin is a C***" in huge letters. The t-shirt was even featured on Obama's website with no rebuke from the MSM or Democrats. http://bit.ly/1sCgoly

Howard Stern idiotically blamed Palin for the AZ shooting and called her a "F***er and a c***!"

Despite the Left's best efforts to humiliate and destroy her, Palin has hung tough, remaining faithful to the mission of the Tea Party; the preservation of our freedom, liberty and culture – traditional conservative principles and values; God, family and country.

And yet, there are those on our side who suggest that we kick Palin to the curb because she has become "too toxic."

The field for 2016 is pretty crowded. I am not ready to select a candidate. However, if Palin throws her bonnet into the ring, my heart is with her 100%. He need a hero.