Lloyd Marcus
#Take Back Our Kids

April 27, 2015
Our nineteen fifty something station-wagon was loaded with mom, dad, big fat Aunt Nee (300lbs ), myself and four younger siblings. Aunt Nee raised my dad; his surrogate mom. Our family was excited about spending a hot summer day at Carr's Beach, Maryland. I had no idea at that time that it was the only Maryland beach open to blacks. 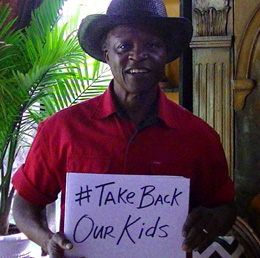 Before hitting the road to the beach, the ritual included riding from our black suburban community into Baltimore city to pick up Aunt Nee and stopping down "Jew Town" to purchase corned-beef and a bread that the adults loved. I did not get a sense that my parents calling it Jew Town was meant in a derogatory way. It was simply an area of Baltimore filled with Jewish businesses that sold great food.

As a matter of fact, most of the corner stores in black neighborhoods were owned by Jews. Blacks purchased items without cash, put on their account. Store owners would log items in their book; no bulletproof wall and turn-style between the Jewish store owners and their black customers.

We always had a wonderful time at the beach and rode home exhausted. Dad's car was not air conditioned. Looking back, I wonder how on earth did we endure; three adults, five kids, food and beach supplies stuffed in a hot station-wagon. And yet, all my memories of family days at the beach bring a warm smile to my face.

Mom was a great cook. Two of mom's weekday dinner menus stick out as favorites. One was mom's hot homemade biscuits with butter and King Syrup. The other was collard greens with cornbread dumplings. We kids were clueless about the economic component surrounding these meals. We simply enjoyed them, never feeling deprived.

Wednesday nights were prayer service at the storefront church in Baltimore city where dad was assistant pastor. On the way home, there was a corner bakery right before we crossed over the Hanover Street bridge. Whenever dad unexpectedly pulled over to purchase a dozen donuts, it was an exciting family treat.

As the eldest, I remember my parent's lean years more than my siblings. One Christmas, I was extremely excited receiving a secondhand bicycle. Years later, Santa delivered new bikes for my younger brothers and sister.

Dad was among Baltimore City's first black firefighters and mom worked part-time as a custodian at a high school and a domestic for white folks.

My point is we did not have what kids have today. And yet, we enjoyed the little things. We did not feel deprived. Mom and dad always found a way to get us whatever we needed. I remember wearing my new suit for 6th grade graduation looking at my friend Martin wearing a suit a few sizes too small. My three brothers, sister and I were happy.

The Bible says "Train up a child in the way he should go, and when he is old he will not depart from it" (Proverbs 22:6). While my siblings and I had our individual periods of rebellion, like the prodigal son, we defaulted back to our home training; our parent's principles and values.

Today, the Left is aggressively usurping authority over your kids, ripping parenting out of your hands. http://bit.ly/1EnSzb8

Decades of allowing liberal indoctrination to go unchallenged has produced a generation of youths who believe in the name of "fairness" that no one should have more than anyone else (income inequality). Needs and desires are now declared to be rights (government entitlements). In our quest to prove our tolerance as conservatives, we allowed the Left to steal our kid's minds. http://bit.ly/1JC7mOY

Youths are idealistic. Once liberalized guilt-ridden youths are led down the road of trying to make life fair, the consequences are far reaching. For example: Pressure from students is forcing colleges to make all campus restrooms "all gender." http://bit.ly/1Fh9ZH5 An Oregon High School created gender-neutral restrooms for transgender students. http://huff.to/1EvNShe

In case you have not noticed, the Left has zero tolerance for anyone daring to disagree with their far left radical liberal agenda. They punish and even seek to criminalize opposing points of view. http://exm.nr/1GpIYjv How long will it be before our kids are reporting their parents to authorities after overhearing them express an opinion out-of-step with that of the Left, government and the mainstream media? http://bit.ly/1yWSsm4

Folks, it is time that we take back our kids from Leftist's indoctrination.

Though "#Bring Back Our Girls" won rave reviews from liberals, sadly, it did nothing to free the 200 girls kidnapped and made sex slaves by Islamic extremists. A year later, the girls have not been returned.

I wish to implement, #Take Back Our Kids. I am calling all parents to closely monitor their local school administrators and school boards, confronting them when necessary. Home schooling is a great option. We can no longer sit back and passively allow the Left to totally control the thinking and beliefs of our kids. We must #Take Back Our Kids.