Lloyd Marcus
We must rally behind the Kleins 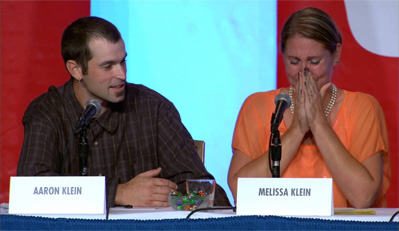 Sorry folks, I just cannot let this go. Every fiber of my being screams out in outrage. I don't know what to do, but We the People must do something! Our side is composed of Conservatives, Christians, and true patriots with brilliant minds. Surely, we can come up with a solution to defeat a handful of evil Leftist arrogant, tyrannical, bullying Oregon government officials.

In case you were abducted by aliens and just returned to earth (I watched the movie Close Encounters yesterday), Christian bakery owners Melissa and Aaron Klein were fined $135K and state ordered not to speak publicly about it. http://fxn.ws/1D1r17x The Kleins' crime is refusing to bake a cake for a lesbian wedding.

Now get this folks, the Kleins served their lesbian client on numerous occasions. But, the Kleins' religious faith forced them to decline from doing anything in support of a behavior that is contrary to the Word of God. That is the Kleins' and our first Amendment Right. http://bit.ly/1HN6nPV

Leftists have masterfully entrenched the absurd claim that not supporting a behavior is the same as "discrimination" against a person. Oregon officials figuratively told the Kleins, "Screw your rights; comply or suffer economic death."

Who are these Oregon officials who think they can give the Constitution and 40 million Christians the finger and get away with it? Brother and sister patriots, we cannot let this go unabated – literally standing by and watching Christians slaughtered right before our very eyes.

Donald Trump said his rising presidential poll numbers confirm America's "silent majority." Rush Limbaugh asked why are we not seeing proof of their existence – where is the push back against SCOTUS redefining the thousands of years old definition of marriage, the bullying of the Kleins, and so on?

Explaining his point, Rush cited when Obama sent bus loads of illegals to Murrieta, California. Local residents rose up in protest and would not allow the buses to unload. http://bit.ly/1Hgcskr Why are we not seeing that kind of resistance against the Left's government minion's full court press, no-holds-barred assault on our freedom?

I will not give the ministers' names – because I think it is unproductive to beat up on people on our side; focus on defeating our nemesis, not each other – but in response to SCOTUS unlawfully and outrageously cramming same sex-marriage down America's throats, I heard a few TV preachers say, "Let's not overreact. It's just the world acting like the world."

It felt like the preachers were conceding the point, advising us to speak gently about the topic. Let's just keep our beliefs safe and warm within the walls of our churches. Well, guys, the Left "ain't" gonna allow Christians to do that.

When a reporter asked a homosexual activist attorney if there will be a "ceasefire" now that they have been given the right to marry, the attorney said absolutely not. She said that while they respect religious rights, they will continue to fight for gays to have the cakes and flowers they want. Do you see the insidious, crafty way the attorney solidified the Left's determination to force Christians to act against their faith? Who in the world is stopping gays from having the cakes and flowers they want? Nobody. The Totalitarian attorney is really saying they will not rest until every Christian is government-mandated to fully embrace homosexual behavior.

"First they came for the Socialists, and I did not speak out – Because I am not a Socialist.

Then they came for the Jews, and I did not speak out – Because I am not a Jew.

Then they came for me – and there was no one left to speak for me."

What am I saying? I am saying if we passively allow the Left to destroy the Kleins, we are next!

I thought another "Dan's Bake Sale" http://bit.ly/1goxlBl style rally in Oregon might be in order for the Kleins. Imagine, multiple thousands showing up in support of the Kleins and protesting the Left's unconstitutional tyranny. We would need someone with a big platform like Rush to pull it off.

As I stated earlier folks, I prayerfully covet your ideas and solutions. All I know is We the People cannot simply stand idly by and allow what is happening to the Kleins go unabated. Quoting heroic Todd Beamer, "Let's Roll!"