February 26, 2016
Several young people were standing in line waiting to get into the Ted Cruz rally in Carson City, Nevada. I approached one of them. "Excuse me. Sanders attracts millennials. What made you choose Cruz?" Chris said he really likes Cruz's respect for the Constitution. Chris went on to say he disagrees with Sanders' free tuition proposal. Chris said he works and does not want government taking huge chunks of his money to pay for people who neither want or deserve to go to college. Chris has plans for college. He also said he is not looking for free stuff from the government. 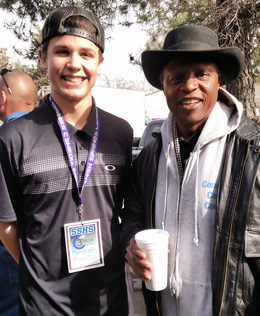 Folks, talk about refreshing. My mind was filled with questions. How did Chris escape liberal indoctrination? Where was he educated? What does his parents do for a living? However, the line began moving as people filed into the hall.

Allowing liberal indoctrination to dominate public education and our culture has really infected the thinking of many Americans. According to a recent poll, almost 60% of Democrats think Socialism would be great for America. http://bit.ly/1UlOYlx Socialism is horse hockey folks; mediocrity spread equally. Real fairness, prosperity, individual liberty and true compassion resides in Capitalism. http://bit.ly/1oHgC0m

This is yet another reason why America desperately needs Ted Cruz; a bold true believer and outspoken advocate of Conservatism. http://bit.ly/1WIRell

Chris is a breath of fresh air; hope for our country's future.