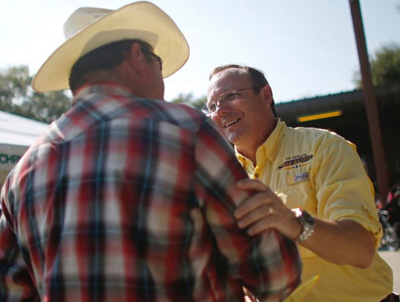 With the extraordinary Cruz vs Trump battle for the GOP presidential nomination sucking up all of the political oxygen, it is easy to miss that awesome conservative retired Air Force Col Rob Maness is running for the U.S. Senate in Louisiana.

Folks, please allow me to cut to the chase. Our country is going to hell in a hand basket fueled by GOP cowardice and an entire Democrat party hijacked by anti-American zealots. The only way we stop the horrific effects of Obama's insanity and corruption in both parties is to send rock-solid conservatives we can trust to Washington; candidates with backbones-of-steel who refuse to go-a-long to get-a-long.

Speaking of backbone, Maness's military awards and combat decorations include the Legion of Merit, the Bronze Star and Air Medal. I am pretty sure Maness will not be intimidated by RINOs, metro-sexual democrats or Obama bureaucratic henchmen in DC. Maness is like an oak tree firmly and deeply rooted in the rich fertile soil of his Christian faith.

When you cut through all the political deceptions, lies and broken promises, it always comes down to sending character-driven representatives to Washington. Rob Maness' record proves he fits the bill. In plain language, Maness is one of us folks; a real family, God and country good guy.

I was extremely impressed when I met Rob during his 2014 run for the senate; strong conservative fighter, highly respected community leader, served 32 years in the military, husband, father of five and grandpa of four.

Rather than listing all of Rob's leadership roles and achievements, I will say he has proven his competence at the local, state, and federal levels of government; an effective steward of citizen's tax dollars. Please visit his website for details. http://www.RobManess.com

Like any conservative Republican who faithfully advocates for We the People, the GOP establishment is often displeased and threatened by Maness. Rob wears their discomfort with him as a badge of honor.

There is a down-to-earth every-man quality about Rob, driving his pickup truck around Louisiana – spreading the good news of traditional American principles and values; God, family, country and the Constitution. Please enjoy this entertaining 30 second TV ad in which Rob promises to wrestle the gators in DC. http://bit.ly/237F8qi

Here is an example of Maness's strong decisive leadership regarding our national security. In response to the Jihadi attacks in Brussels, Maness advises Congress to fulfill its constitutional duty and finally declare war against the Islamic State. Maness says, "...until we formally declare war, our enemies and objectives will continue to be unclear and the American people will continue to be divided." http://bit.ly/1VmL5Nl

By the way, the Islamic terrorist attacks in Brussels hit a little too close to home for the Maness family. The night before the attacks, Rob and Candy's son flew out of Europe on military leave on an American Airline flight.

According to a new Pew Research report, our country is undergoing a scary demographic shift. http://pewrsr.ch/1RNzWzs Decades of allowing liberals to brainwash our kids and not encouraging immigrants to assimilate is taking America down a different path far away from the country envisioned by our Founding Fathers.

The only way to ensure that the America we grew up with will be there for a our grand-kids and great grand-kids is to consistently send rock-solid conservatives who espouse traditional American principles and values to Washington. In that regard, America desperately needs Col. Rob Maness in the U.S. Senate. Please, lets help him folks. God bless.

You can learn more about Rob Maness at his website: http://www.RobManess.com