Lloyd Marcus
All aboard Trump train 2020! 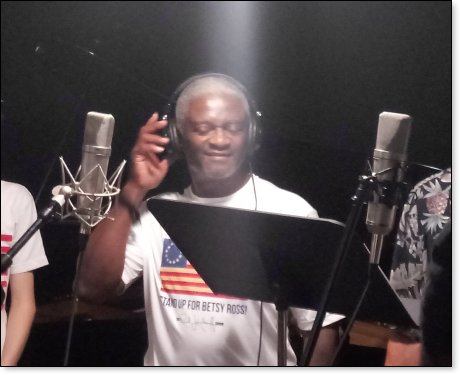 Hello, America. The recording session for my Trump Train 2020 song could not have gone better. If you remember, my music producer is based in Baltimore. I asked him to gather singers to form a choir for the recording of the song. He reported back to me that all the singers he knows do not support Trump or are passionately against him. This prompted me to launch a clarion call for pro-America / pro-Trump singers. The response was tremendous.

The singers were an enthusiastic, racially diverse choir ranging from age 14 to mid 70s. It was thrilling to have teenagers who have not drunk fake news media's anti-Trump Kool-Aid performing on the recording. Everyone was happy, upbeat, and excited about contributing to the re-election of our president – keeping America great!

Despite the singers being strangers meeting for the first time, the recording session felt like a family reunion. Everyone was of one accord.

The recording session was fantastic! I shared the finished mix of the song with a promoter. She said you can feel the joy and unity in the singer's voices. I can hardly wait for y'all to hear it. You will hear the Trump Train 2020 song in the soon-to-be-released music video.

Conservative radio talk show host Rush Limbaugh said he is seeing signs of some on our side becoming weary of fake news media's relentless negative reporting about Trump. They foolishly believe Trump should be less confrontational in hope that the media will be fair to him.

Some on our side still do not understand that progressives are repulsed by Trump's mission to make America great again. Thank God Trump is in the ring punching it out with Democrats, fake news media, Hollywood, and RINOs to achieve what is best for America.

After our awesome recording session, my wife Mary and I arrived back to our hotel room extremely grateful and exhausted. I turned on the TV and flipped through the channels. MSNBC and CNN were engaged in their 24/7 hateful, lie-filled reporting about Trump. Unbelievable.

This confirmed the importance of my Trump Train 2020 song, spreading the truth about our courageous president. God turned the negative circumstance of not being able to find local singers supportive of Trump into an opportunity for true patriots to lend their voices for the good of our country.

I wish to publicly thank all my Trump Train 2020 singers who came from far and wide. I love you guys!