January 14, 2015
The smoke has cleared, and John Boehner, the neo-progressive Obama-enabler, has retained his House Speaker position.

Despite a clear and unequivocal message sent by many millions of Americans and conservatives, the dissenters in the House who would have removed Boehner numbered only twenty-five – twenty-five men and women of conviction, out of two-hundred thirty-six. That is a mere 10.5% of the total Republicans seated in 2015.

The reseating of Boehner, who I now call the Crying Cheeto (due to his weepiness and odd orange skin color), guarantees an agenda of appeasement of Democrats, a failure to rein in an out-of-control Barack Obama, and an agenda favoring the Chamber of Communism. The COC agenda consists largely of deflating American wages by turning a blind eye to massive illegal immigration, and by importing technical and skilled workers from low-wage third-world hellholes.

There will be no serious challenge of Obamacare, which is poised to strangle American small businesses, and impose harsh mandates and financial penalties on a populace already under severe wage pressure – even though Americans have electorally removed half of the Senators who voted for Obamacare.

There will be an acceleration in the "normalization" of illegal immigrants, which will permanently change the character of the American electorate to one that favors increasing socialism, and even outright communism.

There will be no attempt to rein in an overreaching Environmental Protection Agency, whose bureaucratic edicts border on insanity.

There will be no desire to investigate and punish the many dozens of Obama scandals, including the weaponization of the IRS, the internal spying on journalists who report negative stories on the administration, and the importation of illegal firearms into the neighboring nation of Mexico. 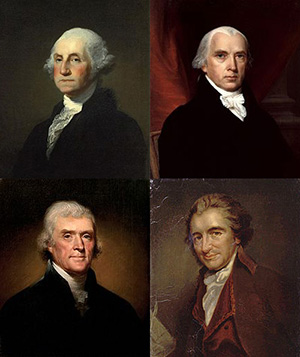 There is a story that emerged last week: Representative Louie Gohmert related that many of the people who were successfully recruited to oppose the Obama-sycophant Boehner, backed out at the last moment, and did so without warning. It occurs to me that they did so for their own selfish reasons. They were afraid of retaliation. They were scared they might lose committee memberships, or not get new ones. They decided that their own personal interests were more important than representing the people they serve. Polls showed clearly that they were being directed to remove Boehner. No matter to them, they voted for their selfish personal gain.

It staggers the cogent observer: Small-minded and petty personal concerns bested the "principles" of approximately 90% of the Republican membership.

But do we not elect people who are supposed to be more principled than the common citizenry? Apparently we do not.

These Founders, these men, were made of sterner stuff. Now, we have men and women who can be cowed by the threat of the loss of minor privileges.

I sometimes observe that soft times – times of abundance and plenty – breed soft men. We have bred a crop of weak, unprincipled representatives. Their elections and their actions guarantee that we shall enter much tougher times. The bright spot of this situation is that, as things go south – and they will – in about a generation perhaps we'll have a more moral, hardworking, principled citizenry.

Perhaps we will be made of sterner stuff.

Perhaps we will deserve the freedom that we will have to fight for, again. We have squandered the Founders' sacrifices. Someday, we shall need to make our own.

Lawrence Mayo, also widely known by his pen-name "Lazamataz," is a skilled web developer in Microsoft .NET technologies. He has had a keen interest in politics for two decades, and has been a political commentator and editorial writer for the last five years. Originally born in New York state, he transplanted to Georgia, and never looked back. Contact him at Lazamataz@yahoo.com.