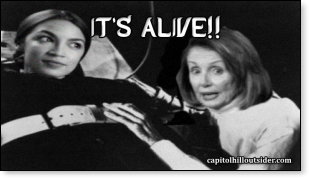 It is hugely entertaining to watch the battle emerging between Nancy Pelosi and the extreme left of the Democratic Party. In particular, the four congressional freshmen (bet they hate that non-gender fluid term) who have promoted themselves as "the squad" have been a constant source of consternation for the House Speaker.

While Pelosi still wields a great amount of power within the party, there is assuredly plenty of dissension within the ranks. The young whippersnappers that Nancy wishes to keep in check have other ideas – and furthering all of their "progress" means destroying all who get in their way – including more "moderate" Democrats.

Alexandria Ocasio-Cortez received a tremendous amount of campaign funds in order to unseat a long term incumbent Dem in the primary, and that is the tactic that far left groups plan on using to get rid of old guard establishment Dems. The socialist-communist left is very impatient in their efforts to destroy the American republic, so more new blood must be added to that of "Ocrazio," Ilhan Omar, Rashida Tlaib and Ayanna Pressley. There's plenty of Soros money to get the job done in a number of Democrat incumbent districts, which is the reason you're seeing virtually every Democrat – and all of the Dem presidential frontrunners – lurching so hard to the left. The fact is that they're afraid of Soros funded groups and indeed the increasingly radical base of the party.

"The Squad" – or more accurately, "The Squalor Squad," given their commie utopian "solutions" to what they see as "problems" – is symptomatic of what is wrong with the Dems. In 1960 the Democrats were a party that nominated the virulently anti-communist, tax cutting, "ask not what your country can do for you..." John F. Kennedy. Someone with JFK's viewpoint would be called a "hater" in the Democratic Party of today.

How did this happen? How did the Democratic Party become so radicalized?

It is precisely because of people like Nancy Pelosi.

For years, Pelosi has pushed an agenda that is very far to the left of most of America. The San Francisco district she represents is a microcosm of anti-Christian, anti-conservative and anti-America-as-founded radicals. Since the halcyon counter culture days of the 60s, San Francisco has been home to nearly every whack-o notion to emerge from the radical left. Just down the road, Berkeley – a place that was one the epicenter of the "free speech" movement – ironically has become a place where only left-wing indoctrinated viewpoints are allowed. Conservatives, Christians, Republicans, Trump supporters – in fact all viewpoints not consistent with the far left are verboten, and violence against those who dare to contradict the left, seems to be getting tacit approval or at least a wink and nod from those in charge. Free speech evidently only applies when that speech agrees with the far left.

San Francisco itself, with its liberal policies, is overrun with homeless people. One result of this is that despite being one of the wealthiest cities in the nation, the city can't solve the problem of poop covered streets. There was at one time an actual real time online map of where the heaviest concentration of feces could be found. The site owner apparently took offense at conservative sites linking to it, and has since taken it down, but there are a number of sites that have screenshots of the map while it was still active.

San Francisco has also been traditionally well known for its sizable homosexual population. Nowadays we could say the entire range of LGBTQ+whatever represents a very disproportionate percentage of the population (compared with nearly everywhere else throughout the country). Gay everything is de rigueur in San Francisco, and as we have seen – in a few short years, the ever expanding abbreviated bunch has gone from wanting to be "tolerated," to "accepted," to being able to "marry," to being able to use the bathroom of one's "choice," promoting all of these "alternative lifestyles" as "normal" in schools to finally, actively recruiting little children with things such as "Drag Queen Story Time." Left-wingers such as Pelosi have never discouraged any of this "progress."

Nor has Nancy Pelosi and others of her ilk ever thought there should be any restraints on abortion. The right to kill one's baby up to, and even after the moment of birth is considered to be sacrosanct among the left.

Another method of destroying America as we know it, has been through unchecked immigration, and Nancy has never been one to favor any restrictions on the flow of the "undocumented" across our border. San Francisco, like many cities run by leftist Dems prides itself on being a "sanctuary city," meaning they won't cooperate with immigration agencies even when they are simply looking to round up violent criminals. The real goal by the left here is power – power that is to be achieved by submerging the prevailing population with hordes of third world immigrants who are ignorant of our language, history, culture.

The Dems have done their best to oppose Voter ID laws, claiming it is "racist." That of course is a load of horse hockey designed to hide (not very well) their true intentions – to make it easy for the newly "imported" to vote – for their "liberating" masters the Dems. It's that simple – political power by illegally expanding their voting base with people loyal to their party, but not loyal to America.

All of this has brought us to where we are today – the four members of "the squad" are the result of all of these far left policies by the Dems over the last 50 plus years. These newly minted congress critters all share a deep hatred for America as founded, and are now impatient to get rid of Pelosi and all remaining obstacles to a socialist utopian dictatorship.

By actively encouraging such nonsense and pandering non-stop for years to the radical left, Nancy Pelosi and other left-wing Democrats have caused their party to lurch further to the left than anyone thought possible. Even Pelosi senses that things have gone too far – so much so that the further left the party goes, the more likely it becomes that President Trump will be reelected, along with the Dems taking a shellacking in the congressional races in 2020. Pelosi certainly understands this, as evidenced by her public skirmishes with the commie newbies, but Nancy has no one to blame but herself...

To paraphrase Barack Obama, "Nancy, you built that!"