May 21, 2013
WASHINGTON, D.C. Actress Christine White died on April 14, 2013 at Brinton Woods Nursing Home in Washington, D.C. but news of her passing was delayed until a quiet funeral had taken place.. She was 86. A mutual friend of hers, Chaplain Carson Curcini, alerted me to her death over the weekend. 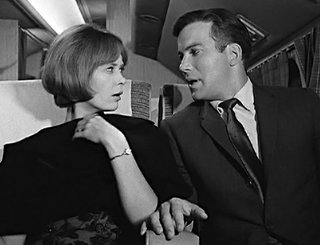 A competent actress. she appeared in more than 50 films and TV series episodes such as, Father Knows Best, Alfred Hitchcock Presents, Perry Mason, Bonanza and The Fugitive.

She was especially applauded for her role in the Twilight Zone episode, "Nightmare at 20,000 Feet" with William Shatner, who later became Capt. Kirk. A destructive gremlin appeared on the wing of the plane they were on. Fans declared that show as "The best Twilight Film ever."

She was best known for her close relationship with James Dean, the moody young actor who became a cult figure. She had met him through his agent, where Christine worked as a typist.

He was her partner for an audition before the Lee Strasberg Actor's Studio in New York City to train in that famous school. And that became a lifelong relationship. This writer suspects it was an almost romantic one.

In 1976 she appeared in a TV movie about the life of James Dean, playing a secretary, which she was when she met him. That would be her last screen credit. She was very proud when that program re-aired in later years. She would attend the James Dean Memorial Observance in Indiana every year following his tragic death.

We had met in Washington, D.C. at the Capitol Hill Prayer Alert which gathered in a house across from The Supreme Court. We had lunch together often and she would come with me to events on The Hill where I gave the Invocation and Benediction, including a high profile Freedom Award Dinner for Pro-Life Activist Randall Terry, organized by the late Howard Phillips. Prominent politicians from both sides of the aisle were there along with atheists from the Freedom From Religion Foundation to see if they could find anything in the prayers to attack.

Christine was a prolific writer. It was amazing to see the grasp and depth she had on events and on biblical passages that related to the present time. With her solid contacts on the Hill, including the late Senator Jesse Helms, she had an inside track of what was going on behind the scenes and began writing about it in a newsletter read by movers and shakers..

She loved America and was distressed about how it was changing and the increasing war on God. She became a patriot activist in Washington, D.C. and did not hide her Christian devotion and faith.

A couple of years ago she had flown to California to introduce a script she had written, visiting actors in San Francisco and Hollywood who might be cast. That would be the last time I would ever see her. Her health began to deteriorate not long after that trip.

She then dropped out of sight. Friends could not reach her. She will be greatly missed by those of us who knew her and loved her.