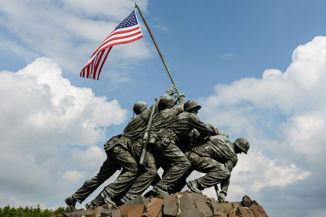 BRENTWOOD,California-Memorial Day-2013. It was not deliberate or intentional. This writer just became aware of it on this Memorial Day while preparing a funeral for tomorrow, May 28th.

That service will be for Helen Genevieve Mastraccio in Brentwood, California. Born into a privileged life, she was in St. Thomas University in Chatham, New Brunswick, Canada, left the University after a year and a half to put on working clothes and a helmet to work in a factory in Rome, New York where she lived.

World War II had broken out and heated up. Very young men were lined up at all recruiting offices to join the service, many lying about their age in order to do so.

Americans had to make sacrifices to assist the war effort, submitting to rationing of staples, sugar, metal, rubber tires, gasoline and nylons along with many others. And they did it willingly.

An intense inward patriotism was displayed in those days which is why it is called: "The Greatest Generation." Everybody was ready to help defend America. And that included a score of women.

Since most of the men were off to the front lines, there were very few qualified men available to work in the factories vital to the war effort. Ammunition, weapons, jeeps, tanks, battle ships, and airplanes had to be built and kept in supply.

It was the women who then lined up to perform this essential work to construct the equipment that would be needed in the war. The shipyards in Richmond, California introduced the term, "Rosie The Riveter," which became known and respected.

One of those, Helen Mastraccio, went to work for Rome (NY) Cable Corporation, working on cables and leads for airplanes used in the war, making her one of the first East Coast Rosie the Riveters.

Had it not been for these patriotic women who were not afraid to do manual work to supply our fighting men and women with secure equipment and transportation, the U.S. Military might not have been so successful.

It will be urged at the beginning of the next Memorial Day-2014, that flags be put on all graves of Rosie the Riveters who have passed away, and should be honored along with the men and women on the front lines. PBS TV that produces a stunning annual Memorial Day Concert and tribute in Washington, D.C. will be notified and encouraged to add this element to the future event.

This will begin a couple of months before the date so that families of a Rosie The Riveter can prepare to place a flag at the grave-site of their loved ones and take part in area Memorial Day observances and services.

Like those incredible men and women in the military, Each Rosie put her own hopes, dreams and desires on hold, pouring out her last full measure of devotion so that each American can fulfill their own. They too are heroes who should be held in the highest level of honor in our hearts. And their families should also be presented a flag at their funerals when they pass away.

May This Memorial Day Hold Special Signifcance for All Americans.

Rev. Austin Miles, a very active chaplain, is a veteran.