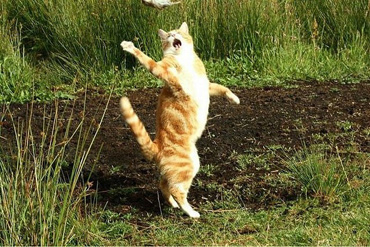 WALNUT CREEK, Ca. Carol Lee Olson, a columnist for the Contra Costa Times (published in Northern California) provided the photograph taken by cellphone that launched immediate public interest and curiosity. It shows a cat, named Cat-a Combs, practicing for the opera...and that's not just a ball of yarn.

After exhaustive investigation and inquiry, we now know the name of the opera that Cat-a Combs was practicing for. It was Die Mousetersinger by Richard Wagner. Now destined to be a big star without being cheesy, Cat-a-Combs will trap the imagination of all. And we will not be surprised to see him in the top category of singers.

Breaking News Just In! We have just learned that when this run has ended, Cat-a-Combs will immediately begin rehearsals for Johann Straus's Die Fledermouse. That cat is climbing to stardom.

Cat-a Combs, who makes it clear he is NOT related to Cat Stevens, was first a rapper! He rapped on the door, windows, the side of a bed and one's knee when he wanted something. He grew up in a dysfunctional feral family where he suffered cataclysmic mental abuse (I'm not kitten) and was adopted by an Irish family of tenors, watching them sing from a catwalk over the stage. That is where he got his inspiration.

Cat-a-Combs will be profiled in an upcoming catalog of singers where he will be listed as...purrfect..

Rev. Austin Miles is a minister who gets a kick out of life.