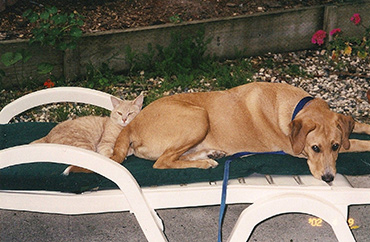 This thought cannot help but seep in when a beloved dog dies. The probing question cannot be restrained, nor should it be. And knowing what The Bible says on this matter brought solace during one of the worst weeks in my life.

My beloved (Big Dog), Rusty, died on Saturday August 17th at 2 P.M. This month was his birthday. He turned 13 and had been going through severe arthritic problems in his hips like most big dogs do, along with some heart problems.

He asked to go out to the back yard, and after being out a few minutes, he collapsed. I stayed close to him for over an hour soothing him. He knew he was dying, and so did one of the pups who, that morning, went to him and gently nuzzled him with her nose curiously. She knew he was about to die. I didn't.

Rusty was alert as he lay there and tried to get up three times. I kept my hand under his face so he wouldn't hurt himself when his head came back down. One fortunate thing was that he was not in pain, nor frightened and there was no struggle. It was all natural. That itself was a real blessing.

As the end approached, his breathing became more and more shallow. Then, for the first time, I heard a dog's 'death rattle,' a clicking noise. The breathing stopped. Then his head gently jerked twice.

I had my arms around him as he crossed over, telling him how much I loved him and that he was a 'good boy.' Then everything became very quiet.

I called a couple of best friends, Dennis and Sara Quinta, both chaplains, who immediately came over. Couldn't have made it without them. They made arrangements for me and helped me take him to the vet where he will be cremated. I kissed him goodbye before they took him inside on the gurney.

That night was tough. The house seemed so empty without him. Going to bed was worse since that night time ritual always took place with him and the 2 pups.The next morning was even worse. That night however, the pups were in bed snuggling with me which was a huge comfort. In fact, when they were adopted two years ago, I knew that in the not too distant future Rusty would die and having them would help get me over the grief since they would have been with me before he died. I was right.

An appointment was made to talk to Rusty's Veterinarian, Doctor Scott Lichlyter of Brentwood Family Pet Care, who was very helpful. He pulled up an X-Ray of Rusty showing he had an enlarged heart and the arthritis in his bones and joints was severe. The Vet said that 'for a big dog, the age range is from 8 to 14 years.' "So," he said, "Rusty, being 13 (which is 90 years in human life) had a good run." Shirley and I did keep Rusty comfortable, giving him everything he needed and he was happy.

He spent his entire life with me and Shirley. Those who say they 'will never get another pet because it hurts too much when they die,' must rethink that idea. Animals are given only a specific life span. Yes they will eventually die. But one should never close the door to having (maybe rescuing) and loving another dog.

It was exactly one week ago that Rusty died. That one week anniversary is particularly hard when a loved one has died. I am going out with Chaplain Dennis for lunch today. Being with a good friend provides a real source of comfort at a time such as this.

And I will have the opportunity to meet "Maggie," a dog that caused Chaplain Dennis to race from Michigan to Arizona to rescue from a "kill shelter" and bring back to his California home. He too lost a special dog, Sasha, but that did not stop him from saving Maggie and bonding with her, which enriched both of their lives.

We rescued Rusty from a shelter. He actually saved my life. When he was a puppy he chewed up my glasses that had plastic frames. Facing a college class to teach, I grabbed an old weaker pair with metal frames, took the BART to San Francisco, was about to cross a street, a bus came around the corner, the back tire threw up a small rock that flew directly at me, hitting me in the left temple which would have killed me. However, the pebble struck the metal frame instead and bounced off.

I would not have missed the opportunity of having Rusty in my life for anything in this world. He was a spectacular, loving big dog, who carried himself with dignity, even at the last. Rusty will be sorely missed, but he will always live vividly in my heart.

Some people have been heard to say, "Ah it's just an animal!"

NEWS FLASH! There is no such thing as JUST an animal. How I pity one who has never bonded with a dog, a cat, horse, deer, cow or even a chicken. Yes, a chicken! I had a pet chicken, "Nell," when I was 9 years old and we were great friends.

Just look in a dog's eyes when you pet it and observe the deep soul behind those eyes. You have never really been loved until you have been loved by a dog.

When Rusty died, I was apprehended with an unrelenting inconsolable deep grief that only those who have experienced it can understand.

Readers, be good to yourselves by adopting a pet at a local animal shelter. A lot of love awaits you there. You will truly complete yourself when you do.

So back to the big question: Do Dogs Go To Heaven?" Read my story, " Do Animals Have Souls?" at this link::

To see the complete 11 episodes of this series on God and Animals check the archives for October 2011 and November 2011 on the same website: www.revaustinmiles.com

END NOTE: Shirley is a very private person and her reaction and grief was purposely kept from this story for that reason.