Rev. Austin Miles
Heroes of 9/11 - including spectacular 4 legged one 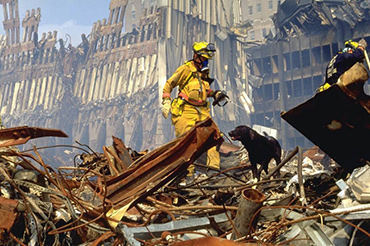 NEW YORK CITY (9/11/13) When the surprise unprovoked attacks exploded on September 11, 2001, many could not help but snatch some of the feelings President James Madison must have wrestled with when the British invaded Washington, D.C. and burned the capitol, which also took place in September...of 1814.

President Madison wrote: "The enemy by a sudden incursion has succeeded in invading the Capitol of the Nation. During their possession...though for a single day only, they wantonly destroyed the public edifices...an occasion which appeals so forcibly to the patriotic devotion of the American people, none will forget that Independence is now to be maintained, with the strength and resources which Heaven has blessed."

Less than three months later, President Madison wrote: "The two houses of the National Legislature having by a joint resolution expressed their desire that in the present time of public calamity and war, a day may be recommended to be observed by the people of the United States as a day of public humiliation and fasting and of prayer to Almighty God for the safety and welfare of these states, His blessing on their arms, and a speedy restoration of peace, I have deemed it proper, to recommend...a day of humble adoration to the Great Sovereign of the Universe."

This is how one President of The United States handled a destructive attack. His appeal was heard by God, and perhaps we should give heed to the words that he spoke as we remember 9/11. From his words we can learn how to find peace in the midst of this storm and find some answers to a lot of lingering questions including those about God. Did He forsake us on that day?

Then there was talk on TV that Islam and Christianity worship the same God. Really? Right after the attacks, an Islamic leader went on TV and proudly proclaimed, "This proves that OUR god is more powerful than YOUR God" which settles the question once and for all.. We do NOT worship the same God..Case Closed.

We lost more than lives in those carefully coordinated attacks. Any innocence that may have been preserved, was lost forever. We will never be the same.

In all the chaos and uncertainty, heroes were made that day even though thousands are dying or have died from lung disease and cancer as a result of the exposure to asbestos, pulverized concrete and other toxic materials of the collapsing buildings which filled the air for weeks.

Those who did not die will be sick for the rest of their lives. This includes construction workers, police, firefighters and other volunteers who worked at the site, in the city morgue or at a landfill where more than one million tons of trade-center debris were carted.

Amazingly, every police officer, fire fighter or volunteer, who struggle with severe lung problems today, say without hesitation that they would do the same thing again. They have no regrets of the serious price they paid to save others.

There were many heroes on that day. While thousands of people were running out of the buildings, knowing the towers would collapse, many were also running into the buildings to save others.

One of those was Father Judge, a Catholic priest and chaplain to the New York City Fire Department. He could see that the building was about to collapse.

Knowing a fireman was trapped in the rubble, injured and dying, Father Judge rushed inside the building to give the fireman the Last Rites. As he did, the building collapsed, killing both of them, along with many others. This dedicated priest faithfully fulfilled his duties right up to the last and at the cost of his own life.

Another who rushed into the building was a seeing-eye dog. He was with his owner (who is blind), when the first plane hit the building. The Golden Retriever led his master down the stairwells and safely out of the crumbling building to the chaos outside..

The second plane hit. The dog ran back inside the burning buildings to lead others out to safety, which he managed to do before the buildings collapsed. This spectacular dog, truly man's best friend, was burned and injured in the process but survived with a wagging tail. He had saved lives at the risk of his own. A four legged hero indeed.

While the savage attacks were severe, they did not destroy or stop America in her tracks. On the contrary, these uncivilized subhumans learned what Americans are really made of...including four legged ones.