September 22, 2013
It was expected. Today, September 22, 2013, the bridge was crossed by the widely published writer, author of three books and host of the website: www.revaustinmiles.com, which has over 2 million visitors. In the immediate aftermath, many memories come to mind about a fascinating life, career and a multitude of colorful adventures. 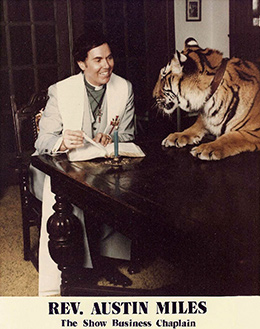 There were the years as a circus ringmaster which brought national attention, resulting in some movie roles, traveling roadshows, being historic narrator for The Royal Lipizzan Stallion Show (for one)..the countless television programs including Entertainment Tonight, The Larry King Live show, local TV show interviews all over the United States and Canada....a frequent guest on Issues in Education, a national radio program hosted by Bob and Geri Boyd...and being spotlighted in People Magazine.

There are the memories of an early local television studio in Indiana which played a heavy role in the years to follow, with performance roles in repertory companies and a stint with The Spike Jones Show...going into military service where mustard gas exposure altered a life set on a definite path that would be no more...but most important of all..receiving a call to the ministry at the age of 10, and later in life, the unexpected confirmation of that call, in the center ring of a circus of all places – a dramatic event witnessed by hundreds of spectators that has been recounted in many magazines such as Gideons.

Following study and vast preparation, ordained to the ministry, credentialed and certified as a chaplain, the first assignment being, "Chaplain to Show Business"... later becoming a trainer and mentor of chaplains. The ministry was originally based in New York City with an outreach to troubled youth in the city's toughest neighborhoods as well as weekly teaching-visits to Warwick School for Boys, a reform school in upstate New York, with a very high success rate in rehabilitating juveniles. There is so much more.

Many memories come from an action packed life. Crossing the bridge was like sliding into 3rd base, considering several emergency visits to the hospital during the past several months. On this date it is goodbye to a younger life with some choices that could have been better, and after the crossing today, surrounded by a loving family, saying, HELLO to my 80th year....the year of maturity...wait...hold on...surely you didn't think...ahh never mind. It is to be noticed that this weekend (of my birthday) has been proclaimed, World Gratitude Day. Awwww.

The night before, a surprise birthday celebration took place at the church, with the fellowship hall filled with well-wishers that was totally unexpected as I was led into the hall to "pick up something." With the rousing welcome inside with balloons, decorations, even a red carpet as Michael John Teeter played, "Happy Birthday," on his guitar, the attendees felt history would record that moment when this new 80 year old was at a loss for words.

In any case, life will now be really productive. There is no retirement even considered for the future. As long as I have breath, I will serve The Lord – a covenant made with God in my earlier life, which has not and will not be broken. And with a renewal of health, a new future is being approached as the ministry with new energy will embark on a whole new beginning.

FINAL NOTE: Those who may be disappointed in the ending of the story without the ending of me, (Sheesh!) were forewarned by the MilesTones heading, which in itself indicates strange twists and turns of legitimate stories.