September 26, 2013
PESHAWAR, Pakistan 9/25/13) It is time for Muslims to get a clue. As the attacks on America and especially upon Christians and their churches by Islamic nations began and steadily increased, so did natural calamities against those countries including more and more earthquakes with growing frequency. 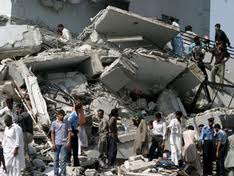 On Sunday, September 22, 2013, Islamists set off human bombs in front of the historic All Saints Catholic Church, that were set to explode as worshipers exited the church after mass. They were to be given food out on the front lawn. Six hundred Christian worshipers were present.

These people were simply worshiping God peacefully when the unthinkable deliberate act occurred. Seventy eight people were killed, including 34 women and 7 children. More than 100 were wounded. Such attacks against God's people will bring judgement on all perpetrators and the country that houses them..

As Arab Christians were burying their dead, a massive earthquake struck Pakistan three days later, Wednesday, September 25th, 2013, killing 328 people (with that number climbing) and seriously injuring 373 – more than triple the number of dead and injured when Muslims bombed All Saints Church. That itself is a divine statement.

It is time for all Muslims to thlnk about the possibility of having been deceived by the religion they have been recruited into which is contrary to every tenet of the true God, who will not be mocked.

Because America has drifted so far away from God, His hand did not prevent the attacks of America beginning on 9/11. His judgement often comes from the hand of our enemies that He has allowed to partake in His judgement upon a nation that has turned its back on Him. America has done just that by adjudicating immorality as the norm for the United States and the ghastly sin of brutally murdering (aborting) babies in the womb that are 'inconvenient' for the mothers. No only that, they say, the world is overpopulated so steps must be taken to control the population.

Muslims are to be admired for their sincere heart for religion.and their physical worship of the declared deity of that religion. Their disciplined prayer life, three times a day getting down on their knees to pray, wherever they might be, should be an inspiration to all Christians who dabble in prayer, doing a snatch of prayer every now and then ,especially during a crisis, but never interrupting their day to do so, or to physically do so by getting down on their knees..

This is why Muslims who have received a Divine Revelation of Jesus in vivid dreams (which are taking place all over the Middle East) are willing to leave all....family...friends, possessions (and at the risk of their own lives) to follow Jesus and devote their lives to Him when they learn the truth. And they become far better Christians than those born into the faith and take it for granted, even sloughing it off, to the peril of all.

America as well as Islamic countries are in the midst of what may become terrifying judgment from God unless we get back to our roots, bring back morality and ethics, which is the strength of any country or individual, and understand that we ALL are being deceived by a corrupt world system that has bombarded us, now beginning in the schools, with propaganda that declares that good is evil, and that evil is good.

The result has been earthquakes in places that do not even have a fault,..mass-flooding all over the world taking out entire communities, forest fires that seem to come out of nowhere and then the lightening strikes in California a couple of weeks ago.

Lightning strikes were taking place all over the state, even in the absence of thunder storms, and simultaneously setting fires in various areas of the state with many proclaiming that, "California is burning." The whole world is next.

Many are agreeing with Joshua who said, "And if it seem evil unto you to serve the Lord, choose you this day whom ye will serve; whether the gods which your fathers served that were on the other side of the flood, or the gods of the Amorites in whose land ye dwell: but as for me and my house, we will serve the Lord." Joshua 24:15.

Sounds more sensible to this writer than anything being said or proposed by the world.