October 28, 2013
WASHINGTON, D.C. Earlier we reported that Nancy Pelosi, determined to ramrod through the 2,014 page Obamacare Bill that nobody had read, famously said, "Look, just pass the bill, THEN you can see what's in it." (emphasis mine) 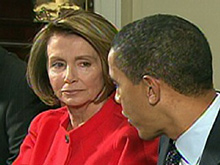 Now we know why and how she was able to pull this off. The bill does not apply to her or any government staff. It is specifically stated, (buried in that bill ) that this forced plan will not apply to members of congress. So none of the legislators will be affected by it. So Do as I say, not as I do. Gives a new meaning to:You go girl!

The Journal, published by Summit Ministries (October 2013 issue) correctly pointed out that secularists frequently accuse Christians of violating church/state separation. "Ironically, this is exactly what the HHS mandate (Obamacare) does."

By the state ordering the church (which includes Christian businesses) to pay to kill babies in the womb (abortion) provided by mandatory "insurance coverage," that you must pay for or be fined, [it] is not a "benefit" just for the Christian employees, but the premiums paid goes out into the general fund which arranges for a third party (abortion provider-Planned Parenthood) to carry out the deeds on others throughout the U.S. No different from hiring a mafia hit man to carry out a contract murder. The Obama Administration demands that the church do just that.

Required marriage licenses is another example. Marriage was totally a church function. The state barged in and forcibly made the church a partner with the State (in that sacred covenant) which never should have happened.

Next the State redefined marriage from man and woman, to person and, well, anything, (we read of a woman who 'married' her dog.) Indeed, the marriage licenses today have replaced "Bride and Groom" with, "Party One and Party two." It is absurd to hear or read of, "His husband," or "her wife." Everything that once sounded intelligent, it seems, has gone out into space.

Girly Hats: Nothing that comes out of the Obama Administration should be a shock. Obama has just dictated that the military must wear...now get this...Unisex Hats, according to NewsMax. This has outraged military men who call these Obama creations, 'Girly Hats." That's right, no more distinction between men and women in their apparel. This nutty idea will be finalized this coming week. At least that is what Obama is hoping for.

More Perversion: Obeying Obama's commands, beginning in January, boys can now go into the girls bathroom and showers in the California Public Schools, whenever they want.....can't discriminate against anyone y'know...one shouldn't restrict these places to one sex or another, that would violate equal rights promised by the Constitution by golly...

The liberal (Communist) press misrepresents everything it prints, including what Pope Francis has supposedly said: 'the sin of wealth,' 'even atheists go to heaven,' 'bringing back indulgences, 'the church must go softer on gays and indeed, sin itself.'

To again spotlight the lies of the Obama Socialists, here are all the disputed "quotes" of St. Francis and what he ACTUALLY said that the media purposely distorted. Below is the direct link to the story on American Prophet, an excellent site, written by Selwyn Duke:

DOTTED LINES: The IRS, when put together, spells – Theirs! Yep .....ever notice how if you have a litter box in the house or tub, people invariably say, "Oh, have you got a cat?" Rev. Ed Berkey (retired) says just once, when someone asks him that question he would like to say, "No, it's for company."....Rev.Berkey also noted that older people read the Bible more as they age, then asks...."are they cramming for the finals?"

The Bible vs. Cell Phones

Ever wonder what would happen if we treated our Bible like we treat our cell phone?

What if we carried it around in our purses or pockets?

What if we flipped through it several times a day?

What if we turned back to go get it if we forgot it?

What if we used it to receive messages from the text?

What if we treated it like we couldn't live without it?

What if we gave it to Kids as gifts?

What if we used it when we traveled?

What if we used it in case of emergency?

This is something to make you go....hmm...where is my Bible? Oh, and one more thing. Unlike our cell phone, we don't have to worry about our Bible being disconnected because Jesus already paid the bill. And no dropped calls!

Going out for another walk.