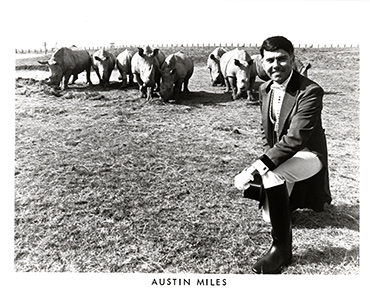 "Wild animals never kill for sport. Man is the only one to whom the torture and death of his fellow creatures is amusing in itself."
James Anthony Froude-Oceana Ch. 5

The most bizarre reasoning ever concocted is the announcement of an auction which awards the highest bidder the joy of cold bloodily killing a Black Rhino, which is part of an endangered species. The logic behind this? To raise money to protect that endangered species. Hows that again?

Sponsored by the Dallas Safari Club, this auction is to provide a license to shoot and kill a black rhinoceros in the African nation of Namibia. And this is Dallas,Texas, mind you, where conservative values supposedly reigns as an example to the rest of the world. Texas can do better than this auction and intent.

Wild life and environmental journalist Cathy Taibbi, a former zoo keeper in Atlanta, like this writer, has known black rhinos personally, having worked, hands-on, with them and is shocked. She said, "They are the most responsive, most personable, most amazing of all the wonderful creatures I worked with during my tenure at the zoo."

She is right. Rhinos are peaceful creatures that will only attack if provoked. Like other creatures they have feelings. Who could ever forget the news clip showing poachers who had just downed a rhino and sawed off its horn while it twisted in agony? It was left to die as the poachers walked off proudly with the horn, leaving the poor animal breathing heavily while moaning 'uh'...'uh'...'uh'

The rhino's horn that is so valuable to the poachers, is used for among other things, an aphrodisiac when ground up (quack remedy). People are so out of control that they will pay any amount to obtain this with no thought of the horrible suffering this causes. Money is all the poachers care about and all the buyers are concerned about is fulfilling their uncontrollable lusts.

Yet, declares Ben Carter, chief of the Dallas Safari club," this is for preservation of the species." Yep. Sacrifice one to save the rest. A fuming Cathy Taibbi said, "Sure, and let's auction off a license for a pedophile to molest just one child, to have his way with him or her, so that we can use the money raised to prevent other children from being molested by guys like him." She makes an excellent point.

The auction raised $350,000. We'd like to know how that money will be used to actually "protect the rhinos." Indeed, we want to see an accounting of every cent of that money. A brash misrepresentation of raising funds may be brought to light. See link of that Auction:

Think what that kind of money could do if used for life instead of financing a cruel killing of an innocent creature so the "hunter" can cut off its head and display it in his den to prove that he is a 'great white hunter.'

How about using that money to furnish a scholarship for a talented student, helping organizations like Bay Area Rescue Mission which gets homeless people off the streets into proper living quarters where they participate in a year long program to get themselves back together and prepare them for new LIFE, or the Lindsay Wildlife Museum and Rehabilitation Hospital in Walnut Creek ,California or Tony La Russa's Animal Rescue Foundation (ARF) for example. This would be funding life instead of cruel death.

It is time to get our priorities back on track. It is time to stop this barbarity including those private wild animal compounds in this country (The U.S.) where one pays a fee to come and shoot any creature they want to shoot in a fenced area where they cannot escape. We need to educate people to think of animals differently like that kid with leukemia who asked Make-a Wish Foundation to provide a trip and equipment so he could go and shoot and kill a bear. I would like to think that we as a people are better than this. And we can be with proper information.

To see Cathy Taibbi's story in The Examiner, go to this link: http://www.examiner.com/article/the-grim-logic-of-trophy-hunters