February 16, 2014
SOCHI, Russia – It was shocking to learn that Russian authorities have ordered that all stray dogs in the vicinity of Olympic Village (which includes many who had been someone's pet and abandoned) were to be killed so as not to be in the way. 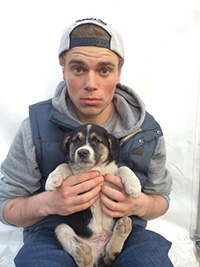 An extermination company has been on the payroll for sometime with the mandate to kill 300 dogs a month. According to reports, the killing is by shooting poison darts into the dogs, including puppies, which causes them to writhe in agony for over an hour before they die. It is a cruel and inhumane action that is totally unacceptable.

Many of the dogs are friendly and domesticated and approach people with a wagging tail. "So," orders the officials who considers the dogs 'biological trash,' "go for the friendly ones first, they are the easiest to catch, then kill them." How heartless can these sub-humans be?

This savage cruelty in the shadow of what is called "A world class event" watched by the entire world and choreographed to make Russia look appealing, represents massive identity fraud, putting on a happy face in the spotlight while carrying out deeds creating horrific suffering just outside the glare.

U.S.Winter Olympian, Gus Kenworthy, from Telluride, Colorado, was appalled at this action by the authorities and took a public stand by rescuing a whole family of doomed dogs he found on the street, four pups and their mother. He has been feeding and caring for them and is doing everything he can to bring the pups and their mother back to the U.S. with him, including getting their shots and examinations. This macho athlete with the tender heart didn't want the pups to be separated from their mama.

It is to be noted that the Russians in general are very good and decent people. One example is billionaire Oleg Deripaska, One of Russia's richest men, he has used his fortunes to rescue stray dogs and pups in the nearby town of Baranovka and has built shelters for them. It is estimated that he rescued 140 dogs before the Olympics and is facilitating their adoptions. Deripaska told the BBC that his motivation comes from his own experience with a stray dog as a child. "I adopted a stray puppy from my village when I was a young boy," he said. "The dog became my best friend."

The shelters are run by another concerned Russian dog lover, Nadezhda Mayboroda. She says that Russian families are coming to the shelter and adopting the dogs on a daily basis. Mr. Deripaska's actions are capturing the minds and influencing the actions of his countrymen and women, according to BBC.

Here's hoping American billionaires will take notice and do their part to promote the humane treatment of all animals.

The story about the good heart of American Olympian Gus Kenworthy has gone world wide, putting him in a position to be a role model for all athletes and celebrities. And God knows we certainly need that. Those with high profiles can do an enormous amount of good if they could only be encouraged to do so.

TV commentator, Keith Olbermann, has affected many people in many ways. This writer has had reservations about him in the past. However, with his current television commentary about the treatment of dogs in Sochi, I will love this man for life. Here is the link to his commentary that was sent to me by wildlife journalst Cathy Taibbi, which reflects his own obvious affection for dogs.

Rev. Austin Miles, a former college instructor has taught in a Russian College in San Francisco with campus in Sacramento, teaching among other courses, English as a Second Language. Each campus consisted of different sides of Russian Culture which resulted in bonding and appreciating the Russian people.