Rev. Austin Miles
The prayer of a clown

February 22, 2014
WEST ASHEVILLE, North Carolina – Have you ever heard someone say this about an individual? "Ah, he doesn't have a prayer." That could be about someone whose life doesn't measure up, or so it is thought. 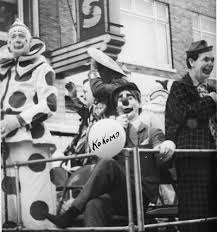 Without intending to contradict those feelings and words, this is a totally false assumption. Everyone, without exception DOES have a prayer that God will hear no matter where you are in life or what you may be into.

Come with me to the circus, a misrepresented entertainment that has been condemned by much of society over unfounded prejudice birthed by Hollywood films that show the circus as a sleazy lowlife community.

First of all, the circus and carnival are two drastically opposite things. The carnival consists mainly of games of chance which can be rigged along with rides to attract the "marks," meaning those who will leave some of their money with them. Yet, people lump the carnival and circus together, and when a circus comes they will say, "Yep, the carnival is here."

The circus is an honorable tradition of performance passed down through generations of families, displaying skills of achievement that dazzles their audiences.

Now let's visit Clown Alley, a section in the "backyard" (which in circus talk means backstage). This is where the clowns congregate in their dressing rooms to apply their makeup and prepare for the show.

One of the most popular clowns in any backyard was Dan "Pappy" Kerr. That was in the days when I was the original, Kokomo The Clown.

Pappy, like all clowns, had a fascinating background, having served in the Navy during WW II. Meat was rationed during that war, so as a Navy cook, he invented the "Oatmeal Hamburger," which tasted exactly like meat but was made of oatmeal. That became such a sensation that he was profiled in Ripley's Believe it or Not." That creation would become the very well known, Veggie Burger.

He had worked on the railroad and later would become a much loved circus clown. When mentioned how well liked he was and such a pleasure to work with, he said, "I haven't always been this way." He then proceeded to tell an incredible story. He had been an alcoholic, chased women and cussed.

While riding in the engine of a train, where the crew was making vulgar jokes and cutting up, they all saw in the distance, a black man with a while suit standing by the track waving his hands for the train to stop.This was odd since the woods they were riding through was miles from any towns or even homes. The brakes were applied and the train came to a halt. They got our of the cab but could not find the man in the white suit.

They went to the other side of the track, thoroughly searched that area without finding a trace of him. Then they walked ahead on the track that was about to curve right. As they got to the curve, they all stopped dumbfounded. The bridge there had been washed away. Had the train not been stopped, they would have rounded the corner at full speed and gone down into the steep ravine and water where nobody would have survived.

Pappy said there was no doubt, by him or any of the crew that the man was an angel that saved their lives. Not only saved their lives but totally transformed their lives. Pappy immediately stopped drinking, cussing and chasing women. He gave his life to God and went to church every Sunday morning, wherever we were. In this case, God answered a prayer that was not even uttered.

Pappy wrote something very beautiful, which he titled, The Prayer of A Clown. It is so meaningful that in later years I read it on television with an orchestra behind me.

The PRAYER of A Clown


Cause more smiles than frowns –


CONTINUE TO GIVE ME: The privilege of entertaining orphans, under-privileged kids and crippled children. And withdraw not the special blessing I've always received for doing this work.

CONTINUE TO GIVE ME, The opportunity of working with the small fry of every race, creed and color, and the use of this opportunity to try and encourage them to help make a better world in which to live.

NEVER LET ME, Know fame or fortune to the extent that I will forget or neglect my friends.

NEVER LET ME, Forget that I AM A CLOWN and a member of an old and honored profession, and should be a credit to that profession by forever striving to keep Clowning on a high and decent level where it rightfully belongs.

NEVER LET ME, Forget that my work is to try and cheer people up, make them happy and make them laugh. make them forget momentarily all the unpleasant things in their lives.

NEVER LET ME, Acquire financial success to the point where I will discontinue calling upon my Creator in the hour of need, or acknowledging Him in the hour of plenty.

I AM THANKFUL FOR, Having found my work, a work in which I take great pleasure and in which I grow in happiness and satisfaction.

I AM THANKFUL FOR, The reputation I have of being able to repeat on any date ever worked.

I AM THANKFUL FOR,

The million people I've appeared before.

The million laughs I've had in "Clown Alley."


"Bless all Clowns and Circus Troupers wherever they may be, protect and watch over us and forgive our mistakes. Help us all to give our very best performance right up to the final curtain. And, when we join the assembly in the backyard of heaven to make "SPEC" for through-out eternity, let not one member of our profession be absent when the whistle blows." Amen

This is a prayer I wish everyone in show business would read and think about. What an example Dan "Pappy" Kerr was to everyone in the circus. And each one in the entertainment industry could indeed be a positive example to all fellow performers and actors as well as everyone who admires their work. Indeed, one doesn't have to be in show business to have that prayer a part of life.

The word "Spec" used above is short for the Grand Spectacle, a parade around the track with performers and animals. The whistle blowing refers to the Ringmaster''s whistle that cues the various events during the performance.

Rev. Austin Miles' first assignment in ministry was as 'Chaplain to Show Business."