Recently in India, a woman named Neelam Sharma, 46, was brutally murdered in her home by a robber who cleaned out all her valuables, seeming to know right where to look. The woman's dog that no doubt tried to protect her was also killed. 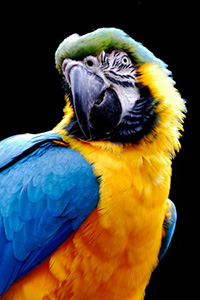 The murderer mistakenly thought that since the family was out, nobody would see him, paying no attention to the parrot who observed it all quietly and wasn't about to keep it to himself.

The slaying remained a mystery until the murder victim's husband, Vijay, noticed that every time his nephew, Ashutosh, came into the house, the parrot screeched frantically. It was not only the appearance of the nephew that threw the parrot into a rage, but it was noticed that even if the name of that nephew, Ashutosh, was simply spoken, Hercule gave the same reaction.

According to the Press Trust of India, Vijay also said the parrot would squawk "Usne maara" which in that language dialect means, "He has killed." This is entirely possible. Parrots do learn words from us and what they mean.

While it has not been totally confirmed to this news source that the parrot actually spoke those words or something resembling them, there was no question that the parrot's reaction to the nephew was enough to finally have police investigate. Sure enough, the nephew, Ashutosh, when confronted, confessed to committing the crime with an accomplice identified by the Press Trust of India as, Ronny Massey.

This is a case where the authorities could actually say, "A little bird told me," even though it was a big bird that told them; another example of a bird with feelings and concern.

What a fascinating adventure it is to take the time to discover the personality traits of all creatures and to get to know them. Everyone who has ever had a parrot will express what wonderful and entertaining companions they can be.

In my younger years, I auditioned for a radio programmer named, Jack McClain, in the mid-west. He had a widowed mother with a rather prominent curved nose, subtly resembling that of her pet parrot. They were so close that when she cleaned her house, the parrot sat on the handle of the vacuum cleaner while singing – yes together – at the top of their voices as they swept their way through the house. They might not have made the cut for American Idol...but for America's Got Talent?....maybe.

Rev. Austin Miles is completing a book about God and Animals (not the title – that will not be revealed until the book is in the hands of the publisher.)