March 11, 2014
ANTIOCH,California (3/9/14) – Many Phantoms of the Opera have graced the world stages. The youngest actor of all to play that demanding role just took his curtain calls in Antioch,California for the closing performance of the two-weekend run at Nick Rodriquez Community Center Theater in the Downtown area. 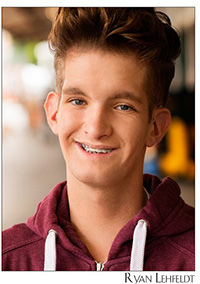 Seventeen year old Ryan Lehfeldt totally owned the lead role with his distinctive deep commanding voice and stage presence accompanied by solid delivery and movements only exhibited by actors far advanced in their craft. He is a gifted natural actor.

His youth was not even noticed or a factor to be considered in the Phantom role, not because of makeup, but due to his strong performance. Nor was the fact that he had dealt with a disability called, Russell-Silver Syndrome (RSS) which left him with a smaller stature than most and a slightly crooked body even though he maintains perfect posture. His delicately distorted angular, yet pleasing face, gives him an extremely interesting look, which is an asset for an actor.

And his performance? He WAS The Phantom who kept his audience in the palm of his hand. He took full charge of his role and carried the show with his wonderful delivery of lines. The audience believed him in his portrayal.

Antioch, California in The East Bay, a river city called, Gateway of The Delta, has become a destination point for the arts with leading road shows booked in the newly restored, El Campanil Theatre and the Stage Right Conservatory Theatre, directed by Bryan Anthony.

The Bay area of Northern California is becoming Hollywood of the North, with new film and recording studios in an area that is photograph proof, meaning a good shot can always be found. Plus there is talent for every entertainment avenue. More and more major film projects are now filming here.

The Stage Right Conservatory Theatre is about to reach the status that the famed Pasadena Playhouse reached in times past. This theater company trains young talent to not only become competent actors and actresses but sees many of them advance through the productions to become what can only be described as star material.

Ryan Lehfeldt was discovered there and has just signed with Top Talent Agency, in San Francisco to represent him in films. That agency is rightfully quite excited to have brought Ryan on board. And you will be seeing more star talent coming out of Stage Right.

Bryan Anthony, does an amazing job of directing talent, staging the production and pulling top performances from his cast, Plus he builds the scenery which is first class, and even creates some of the wardrobe. With a beginning low budget, it was like a vest pocket theater group that has begun to grow into what is now a professional company and talent pool.

This reviewer has watched youngsters who had a goal but no experience, transform into competent performers that any production would be happy to have in their cast, thanks to Stage Right Conservatory Theatre.

Watch for Ryan Lehfeldt. Once you see him on stage, or the screen, you will never forget him. This reviewer never did from the first time he was seen taking on the role of the crotchety Mr. Potter in It's a Wonderful Life, and pulled it off. Keep your eye on this young extraordinary talent.