March 31, 2014
BRENTWOOD,California (3/29/14) – The last time I heard applause during a film was for Donald O'Conner's wonderful "Make 'em Laugh" number to cheer up his pal Gene Kelly in the musical, Singing in The Rain. And it is rare to hear an audience applaud at the end even though that might happen during a screening before a select audience of a new movie. 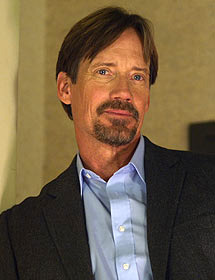 In the just-opened hit movie, God's Not Dead, there was not only sustained applause at the end but several times during the movie along with some cheers. And this was in a secular movie theater, packed with patrons in Brentwood, California with a mixed audience of area residents.

Veteran actor, Kevin Sorbo, really nails the atheist professor of a university that he portrays, who opens his class of philosophy with 20 familiar names of prominent philosophers written on the whiteboard. He asks the students, "What do all of these eminent philosophers have in common?" One student answers, "They are all dead." This gets a chuckle from the class.

Then the professor explains that they are all atheists. They all know that God does NOT exist. Then, the professor announces that he is handing out a piece of paper to every student in the class and each one is to write, "God Is Dead." on that paper and sign their names. "Those who do not," he advises, "will not receive a passing grade."

One student, Josh Wheaton, played by Shane Harper, is disturbed by this. Being a Christian he cannot write or sign such a paper. As the professor gathers them, he sees that Josh has not signed it. This brings a rebuke from the professor in front of the class. The conflict begins when the professor tells the student that he will take the podium at next class, and present his case as to why (he thinks) God DOES exist. The professor will be the prosecutor and the students will be the jury. Then, at the end of the debates, it will be decided once and for all.

Josh is rather lanky with a plain look that appears to be no match for the polished intellect of the professor. Tensions build as the debate begins.

Meanwhile, a Muslim girl attending the university overhears Josh talking about the challenge with a friend in the lunch line. This girl is a secret Christian who, in a dramatic and heartbreaking scene, is eventually beaten and thrown out of her home by her strict father.

The professor, who had married one of his students, finds that her Christianity and his atheism do not make for a good match and they eventually separate. A pastor hosting an overseas missionary finds that a car will not start, nor will two others they try to use, keeping them in place. Yes, God had a reason for not letting them leave at that particular moment. Why? Not what you may think.

A young atheist woman who tapes an interview with Josh, will learn she has cancer and will die. And how do The Newsboys fit into this? The side stories all blend into the main story but in unexpected ways.

The growing antagonism builds to the point that the professor confronts Josh in a hallway between classes, grabs his arm roughly and warns him that he will be demolished the next time he presents his argument about God. Furthermore, he will see to it that Josh not only fails the class but will not be able to enter law school.

The professor tells him that he is being humiliated by him in front of the class and seems to think he is smarter than himself, a learned professor. Then, during a weak moment while engaged in a compelling argument with his opponent, the professor says that he once was a Christian but something happened that turned him off to God. Many who have gone through it will be able to relate to that point.

The debate reaches a boiling point when Josh asks the professor if he hates God, to which the professor says, "Yes, I HATE God." Josh then asks how he can hate someone who does not exist. This brought applause from the movie audience and a smile to my face since I brought up that very point in a world wide story published a few years ago.

A touching moment comes when the girl dying of cancer winds up backstage of the Newsboys concert with a press pass, then reveals to them that she is dying of cancer. The Newsboys give a signal to hold the opening of the show while they pray for the woman. Then they go on stage and the concert begins.

The professor meanwhile is harboring new questions about God. He rushes to the Newsboys concert at the auditorium wanting to find his estranged wife as the pastor and the missionary are on their way to the event as well. It all builds up to a an ending that nobody sees coming.

This superb movie should not be missed. Christians, atheists, and everybody else will get something out of this while seeing a great film with very fine actors. A 15 year old boy with his father Will Byrns went to the showing with me. The 15 year old, Seth, loved it. I encourage families to attend it and by all means take your kids. You will be glad you did.