May 10, 2014
(When this tribute was first published a year ago, the touching responses were such that it has become a permanent part of the Mother's Day celebration, which truly shows the heart of a mother.) 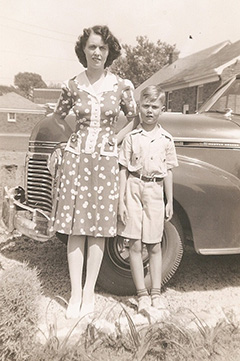 EVANSVILLE, Indiana – 1938 – The sights and sounds of Christmas were everywhere, twinkling lights in windows, music of the season in the background along with the sounds of happy children. There was a hint of snow in the air. Smiles were on the faces of shoppers and children coming home from school knowing that the big day was almost here.

Approaching a stairway to a walk-up apartment on Governor Street in Evansville, Indiana Becky Shanks Keeney, an attractive woman with dark hair, tried to mask the tension in her face.

She had picked up her little boy at a day care center, driven home and made her way upstairs to their small,modest apartment. She had managed to put up a Christmas Tree with brightly colored big-bulb lights that were common then.

Becky was a single mom, not through any fault of her own. Her husband, a handsome man with finely sculptured features and black wavy hair could not responsibly handle his good looks. Within two years after their baby was born, he left.

After they divorced, she had made her way from Houston,Texas to Evansville where she had relatives near by and took a secretary job with the Southern Indiana Gas & Electric company. In those days women were paid less than men even if they did the same work, which made it difficult to make ends meet. Plus she had the extra expense of paying for her baby's daycare while she worked.

Even though she was a woman of strict moral standards, was honest in all of her dealings, and always dressed well, she was met with reproach, even in the church she attended, North Park Presbyterian Church, which prompted the church biddies to whisper, "There SHE is...she's nothing, she's divorced y'know."

Divorce was the unpardonable sin in those days, at least for women, but not necessarily for men who suddenly were put on 'desirable catch' lists while the women were considered worse than whores.

It was Christmas Eve. Silent Night was playing on the radio. Becky's eyes and face were creased with sadness. She had managed to pay all of her bills, on time, but there was no money left for food. The cupboards were bare.

She sat on the couch, then began to cry, something her 3 year old had never seen her do. He sat down quietly next to her and put his tiny hand in hers.

Suddenly, Becky pulled herself up to full height, wiped the tears from her eyes and said, "Wait a minute! What's the matter with me? God has been good to us. He's kept us together...He's put a roof over our heads...Oh Lord, forgive me for my unfaithfulness. Come on Avilee," which was short for Alvie Lee.

She put a fancy table cloth her grandmother had made over the table, and got out her best plates and silverware, handing some of it to Avilee to take to the table. She then put two candles on the table and lit them. One would have thought she was about to serve the finest Christmas dinner in town.

Becky put Avilee in a chair at the table, then sitting down, took her little boy's hand in hers and began to pray over that empty table, thanking God for His goodness and provision. And she meant it. It was a sincere prayer of thanksgiving.

As she prayed, there was a knock on the door. She continued her prayer as the knock became more persistent. She ended the prayer, again thanking God for His goodness, got up and answered the door. Standing there was a messenger with an envelope and gave it to her.

The message was from her boss at work. His note said, "I didn't get a chance to buy a Christmas present for Alvie Lee. Here is $5.00. Would you please do so for me? Merry Christmas."

Now that was back in the aftermath of the Great Depression, and $5.00 bought a lot of groceries. She rushed out of the house with her son and headed for Hasselbachs Grocery Store, making it just before closing time, bought everything she needed and had money left over.

And that evening, she and her little boy did indeed sit down to the finest Christmas dinner in town.

Becky would later meet and marry a lineman who worked for Southern Indiana Gas & Electric Company named Harry T., who picked up the pieces of their lives, became a real father for Avilee, adopted him, and provided a solid loving home for them.

The first memory of life Avilee could remember as he got older was that first Christmas. His Mom's ethical standards and unwavering faith made such an impression on him that he went on to become a minister/chaplain. The first funeral he ever preached was for his mother who had influenced him so mightily.

This writer knows that the above story is true in every respect because I was that little boy called, Avilee.

I will lovingly remember my mother this Mother's Day, and will again read from the Bible she gave me when I was 11 years old. Please remember your own mother, step mother, grandmother, aunt and any one else, maybe a neighbor, who became a Mom to you. Get a single rose to take to that special Mom with a note that YOU write to let her know what she means to you.

A VERY HAPPY MOTHER'S DAY TO ALL MOMS. MAY GOD RICHLY BLESS YOU WITH OUR SINCERE THANKS FOR YOU BEING WHO YOU ARE.