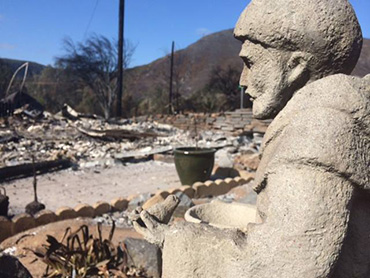 BRENTWOOD, California 5/20/14 – We learned about this at a reception given for U.S. Congressional Candidate Tony Amador of California's 9th District, who's campaign statement is: "Our district needs someone who will stand up to EITHER party's leadership and vote for what is right." (emphasis mine). How refreshing! If ALL our representatives had these principles, this country would quickly regain its prestige, world leadership, strength and prosperity, with life better for everyone.

Pat and Ron Reagan who hosted the reception at Vic Stewart's, told me of a miracle in the flames rising from the horrendous Southern California fires that resembled a modern day Dante's Inferno. There were 10 separate fires that ignited within minutes of each other bringing suspicion to the origins.

Their son, David York, a Franciscan Brother, lives in Carlsbad and watched from his back porch as the flames surged closer to his home. When they came within a block, Dave packed up his family and they self-evacuated.

When they returned later, the area was devastated except for his home and immediate neighborhood, all still standing and intact.

David is Minister of Secular Franciscan Orders at the Oceanside Mission San Louis Rey, and watched TV images of the flames rushing toward the Mission, propelled by the wind. The mission is located at the very foot of the Camp Pendleton Fires. Earnest prayers, of course, were going up and the mission was spared even though highly illuminated by the surrounding fires as it stood majestically in the midst of the chaos.

Then there was a spiritual healing center in San Diego that did not survive the path of the fire. Everything was destroyed and blackened by the flames, EXCEPT for a Statue of St. Francis of Assisi in the front. Even more remarkably, the Coy Fish in the pond near the statue were not harmed. It was as though St. Francis was looking out for them.

Coincidences? Maybe not. Readers may remember a story I did a couple of years ago showing a similar incident in Washington State where Rev. Richard Lee is the Pastor. If that name sounds familiar, Mr.Lee is also the attorney and rising legal star who recently won a very important 2nd Amendment case in the liberal state of Washington.

His church, New Hope Center in Ritzville, was in a direct line of a fire that had flared up in the hills and was surging toward his church. Firemen banged on the door telling the cleaning woman to get out as "this church will be going up in flames."

The cleaning woman went to a rising behind the church, and began to pray. Those in the congregation heard of the fire and came, one by one, to gather on that hill and all prayed in one accord, asking God to turn back that wind.

Just as the flames were in licking distance of the front door, the wind did suddenly change directions, saving the church.

What is more, someone took a video of the entire scenario which was included in the story. The turning of the flames was so dramatic that among the responses to the story were two emails from atheists who both said, "I was not a believer. But after seeing this, now I am."

The above story set in the Southern California fires also shows God's hand preserving a church, in this case a mission. Perhaps it is time to think of making Sunday church service a vital part of the week along with paying more attention to God, His Word, along with a new determination to get closer to Him. It's really not difficult. And the benefits are huge.

Kudos to the Fire Fighters in California, the best of the best, who are real heroes. They did an outstanding job at a risk of their own lives to save the lives and properties of others. A tip of the beret to all of them.