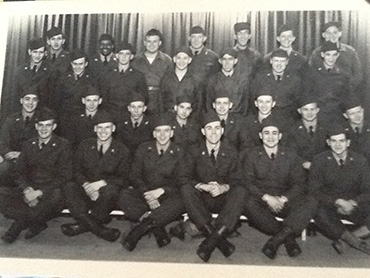 MEMORIAL DAY WEEKEND-FT. RILEY,Kansas-early 1950s – As the troop train rumbled from Ft. Sheridan, Illinois to Ft. Riley, Kansas, many thoughts were being processed. There were of course the uncertainties as to what lay ahead. Glancing out the window, area farmers and their families could be seen along the tracks waving handkerchiefs at us as we went by, which was a tremendous boost to morale. Those families made a point in knowing when troop trains would come by.

This would be the last of such visible patriotic support. The secretly implanted Communists had been devising a way to destroy morale and public support for the military and it began with the Korean War, coming to a head during the Viet Nam War where returning soldiers were spat on, vilified and called, "child killers."

We were living on the ledge of that turnaround of patriotism. Those instigators of unrest were stealthily infiltrating every area of life, our schools, churches, newspapers, movies and in recent years, the military itself.

The basic training in Ft. Riley (Boot Camp) was difficult since the Kansas summers were blazing hot. The heat, along with carrying 65 pounds of equipment on our backs as we did strenuous maneuvers, dug trenches and ran up and down hills, made life extremely difficult. So much so that one trainer commented that the war was easy, it was the basic training that was hell.

In the midst of the boot camp, we were given a one day Sunday pass on Armed Forces Day Weekend. With anticipation, I hitch hiked to nearby Hutchinson, Kansas wanting to go to church to hear an encouraging word and receive some spiritual strength.

Finding a traditional looking church (denomination didn't matter) in the heart of town, I took my seat in a back row. The church was packed.The atmosphere was surprisingly tense.

The pastor proceeded to preach against the war and anyone and everyone who took part in such a murderous mission. Indeed, according to him, we were all murderers. There were a couple of glances in my direction.

My morale dropped down into my boots. I was clearly visible in my uniform, and pastors know every inch of their church and who is and is not there on Sunday mornings.

I sat quietly as the service was completed and everyone began to leave. Going outside, not one congregant in that church nor the pastor made any effort to acknowledge me or welcome me in any way, coming in or going out.

I had gone there hoping to hear an encouraging word from God but instead was vilified for doing my duty for America. It was a political "social message" that had nothing to do with God.

Later, during my military service, I would be exposed to Mustard Gas which ravaged through my body, affecting every organ and in turn, altered the rest of my life. It was fortunate that I had lived. Two young soldiers right next to me died on the spot.

Leaving that church service feeling totally dejected, a nowhere-in-particular walk through the town seemed doable. There were some homes near the downtown area. Passing one of those, a woman in her back yard called out, "Hey, soldier boy!" She then called to her sister inside, "Come out quick, look who's here!" As her sister came out with a big smile, she opened the gate of her yard and said, "You come on in....we're going to fix you dinner."

They prepared a wonderful dinner and talked to me with great love as we sat at that table, prepared by two women whom I had never met and to this day will never forget. What they did for me was far more than what was offered at that so-called church.

After the service I would eventually answer a call from God that had been received at the age of 10, and became a minister and chaplain. The moment of ordination I vowed that any church I would be affiliated with would be not only welcoming to all military personnel and veterans, but would have a special outreach for them.

Today I train chaplains, a very demanding course that requires total devotion. The final exercise before being certified is to take part in the Military Stand Down, a four day event every other year, held at the Alameda County Fair Grounds. An army camp is set up, veterans, many who are homeless, are bussed in and are assisted, strengthened and encouraged during that essential four days.

This Memorial Day will again be filled with gratitude to our men and women in the armed forces. I will again cry when I think of the two young men who died next to me. And I will be forever grateful to two women in Hutchinson, Kansas whose names I don't even know, who showed me such love and encouragement at a time it was needed most.

Thank you military personnel and veterans for all that you do and have done for our country. We keep you on the highest level of honor in our hearts. We could never repay you for what you have done. You put your own hopes and desires aside so that we may fulfill ours. You are all truly heroes. God bless you all.