June 7, 2014
WASHINGTON,DC – It is now a punishable offense to even THINK politically incorrect views. But to actually SPEAK them is worse, especially racial slurs that has become so offensive that one could lose an entire basketball team over it. Come to think of it, that has already happened. 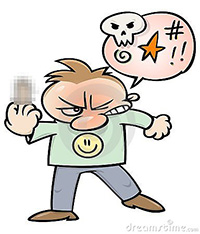 Limiting speech may not be a bad thing after all, IF, it could be expanded to include slurs against Christians, the church, white men, tall people, short people, thin people and.....er...well-fed people.

Perhaps with such rules in place, people will speak more courteously about (and to) others, while exhibiting manners which all results in... class. This factor, to our detriment, has been lacking in American culture for far too long.

And those who disrespect the culture upon which America was founded and formed should be dealt with. That means Christianity and Christians. Those slurs include writings like that brilliant but nit-wit Oxford professor who wrote a book about philosophers ,and who purposely used a small "g" when naming God throughout his book, but curiously capitalized the 'S" in Satan, which tells us a lot.

Plus he discarded the date divisions from B.C. (Before Christ) and AD meaning in Latin, Anno Domini, or, In The Day of Our Lord, substituting instead, BCE (before common era) and CE (common era.) This of course is an insult to God Himself as well as His billions of followers. Anything to get God and Jesus out of sight. See my story on this titled: Intellectual Stupidity on this news site or directly at: http://revaustinmiles.com/index.php/more/546.

In the 1990s the government made an effort to make, now get this, a law against speaking the names of God and Jesus in the workplace. Remember that one?

MilesTones rejoiced over that idea !

Not saying the names God and Jesus in the workplace would put an end to all cussing. Those sacred names are yelled out every time a worker hits his thumb with a hammer or gets frustrated. This would prevent these disruptive outbursts.

With that in mind, Milestones took an active role in encouraging lawmakers to pass that law without delay. However, the more level headed Dems (isn't level flat?) ruled against the law, meaning that it is OK to loudly say the names God and Jesus during cussing but prohibited from speaking those names quietly in respect. Makes perfect sense considering the minds(?)of Democrats.

Slurring anyone is not acceptable in a civilized polite society, which we once were. Losing that has had the effect of spraying graffiti on all persons, cities and towns, splashing trash on beauty.

In a more civil society, we should all be approachable, and treat any person we meet with dignity, respect and manners. This does not mean we must agree with everything they hold dear, but any discussions must be polite.

The older philosophers, like atheists David Hume, Bertrand Russel, even Voltaire, had no belief in religion or the church, but they handled the discussions and debates with respect for all involved as they made their points.

So there is a bright side to all of this: It hammers home a good idea, to THINK before we speak and to handle everyone we face as a soul entrusted into our hands by God. How will WE reflect Him? That is the most important role for Christians – to bring God's love into any situation we find ourselves in. Nothing less.

And make Sunday Church Services a vital part of your week. That will help in cementing the obligation we as Christians have toward society at large. It only takes one individual, multiplied, to begin this improvement. It might catch on.

Sudden Thawt Dept. (with a nod to the late Robert Sylvester of the N.Y. Daily News). Why is the San Francisco Airport referred to as SFO? Is this a deplorable blunder in spelling? – San Francisco Orport? Just wondering.

Photo Caption: Cussing in The Workplace