June 16, 2014
WASHINGTON, D.C. – Not many people are aware that Obama has a "Spiritual Adviser." The mainstream media has been mostly silent about it leaving only a couple of internet news sites, including Huffington Post to notice it. We were alerted by our researcher, Helen Trautman of Pittsburgh, who sent a copy of the information as published in Newsmax, a respected internet source, and the Christianity Today publication, Leadership. 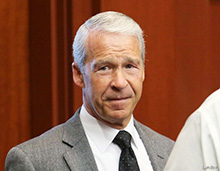 And what kind of "Spiritual Adviser" are they talking about? It is Christian Pastor Joel Hunter, who heads Northland Church near Orlando, who has known Mr. Obama since the Inauguration.

Indeed, Pastor Hunter led a delegation of U.S. religious leaders to the Islamic Republic last month. He raised the issue of several Americans being held in Iran.

Pastor Hunter stated that the Iranian officials "were very receptive to the discussion." According to www.voanews.com, they even guided the group toward the proper person and advised him how to make his request. "We felt like they were very hospitable when we were making our pleas," he added.

"One of the things we have talked about in our conversations has been our concern over people who have met legal trouble because of 'religious violations.' So we talked about Pastor Saeed Abedini and others who are incarcerated there." This was reported by Radio Free Europe/Radio Liberty.

Abedini is an Iranian American Christian pastor imprisoned in Iran since 2012 on charges of 'undermining national security' through his Christian activities in Iran.

The United States broke its diplomatic ties with Iran following the 1979 revolution. Our only hope of possible success there lies with totally dedicated men of God, not politicians.

Yet, this news provoked the righteous to immediately march forth with the challenge: "What has a Christian Pastor to do with 'Friendship with the world?" Others howled that the pastor should not pray WITH Obama (!) which makes him 'unequally yoked." Others criticized him for going to Muslim countries where he would also be 'unequally yoked, but must come out from amongst them.' 2 Cor.6:14,17.

Pastor Hunter was also accused of one who would be simply a 'yes man' for Obama and his agenda. First of all, Pastor Joel Hunter has solid credentials and is highly respected, plus he is a man of spiritual integrity.

He openly disagreed with Obama on the Gay Marriage issue stating, "We are not free to redefine what God HAS defined." Even so, Pastor Hunter welcomes gays to his congregation. He is his own man directed by God. No wonder the media has pulled a blanket of silence over this appointment. The last thing they want is for Godly people to be on the scene.

The adviser's goal is to bring Obama closer to God. The Designated Occupant of The Oval Office has been talking to a couple of other Christian leaders quietly as well. It is entirely possible that he is seeking an anchor and truth.This writer, having observed Obama, believes that he is giving serious thought to the actions he is taking as led by the Communist Party. Down deep, I believe, he would like to change direction and be considered a great man as his legacy. And he has every opportunity to become just that, which is up to him.

The Big Question: Is Obama a Muslim? According to his own statements it would certainly appear so, along with certain of his actions in Islamic countries as well as in America.

However, a high placed Washington, D.C. official who would know beyond question (name purposely omitted due to his sensitive position), and a man I totally believe, told me that Obama is NOT a Muslim.

Our job is to pray like never before for our country and its leadership, especially Obama, that he will experience a change in heart. Let us pray that those things done in the dark will be brought to light, Luke 12:3, 1 Corinthians 4:5. For me,this has worked every time which has astonished some who were up to something.

Let a vital part of our week be Sunday Church Services. That is where our faith is solidified, and brought forth. At this critical time in history we must not do less.