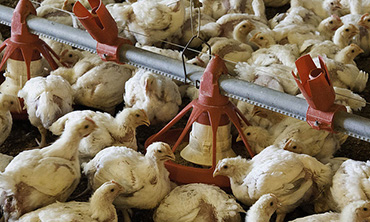 WASHINGTON,D.C. – (7.25/14) – Full disclosure: I stopped eating meat long ago. First of all, as Dr. Doolittle played by Rex Harrison said in that movie when offered a steak, "Oh, thank you, but no, these are my friends."

That is exactly my thoughts. But my abstaining from meat happened after realizing that bacteria causing disease in a cow or chicken can be passed along from the animal to the person eating it. Not only that, all animals feel total stress as they are being led to the killing floor. And yes, that stress is passed on to us when we eat their flesh.

An undercover video showed the shocking images of a cow collapsed on the ground from sickness being forced to its feet by a fork lift that first plunged the forks under the sick cow, actually pushing against the flesh, as the cow mooed and moaned pathetically, crying in intense pain while being forced to its feet, even if only for a second, while approaching the slaughter, which, the experts determined, is the only way that cow can be slaughtered for meat legally.

If it is determined too sick to stand, even for a moment, then they have to cancel that slaughter. Now think about that. Forcing a sick cow to its feet for even a second, makes that meat 'pure' for human consumption. That explains what this is all about, MONEY. And those operators do not care about the horrible suffering they cause to these creatures who feel pain, anxiety, and fear just as we do.

Since that video came out, it is now illegal to do any undercover filming at slaughter houses for this very reason. They do not want the public to see what happens to that 'meat supply' that winds up on grocery store shelves. They want to hide from the public the horrible cruelty they create to make that MONEY, even at the risk of the consumer's health. Some consumers have died eating their meat.

Animals are given antibiotics since it makes the animals grow faster and larger so they can be 'processed' more quickly to make the big bucks flow in sooner. The public be dammed. They have already dammed the animals that tremble as they are taken in line to face the executioner who will brutally kill them.

The New York Law Journal had a story today headlined, "FDA Not Required to Hold Hearings on Animal Feed." meaning that they are not required to conduct hearings on whether to withdraw approval for the use of penicillin and tetracycline in animal feed, a divided federal appellate panel ruled yesterday.

The FDA is supposed to PROTECT consumers. Yet, they appeared before Magistrate Judge Theodore Katz proclaiming that 'withdrawing approval for drugs was a costly and lengthy procedure, and that pursuing a course of voluntary measures was better.' Sure.

Judge Gerald Lynch noted that, "Unfortunately, research has shown that bacteria that develop resistance to antibiotics used in animal feed can transfer to human beings and pose a risk to public health."

In an earlier statement, Judge Lynch stated, "Antibiotics have provided dramatic medical advances in the treatment of bacterial infections, but repeated exposure to the drugs has created antibiotic resistance and infections in humans caused by antibiotic-resistant bacteria, which result, on average, in longer hospital stays, worse side effects of treatment, and a greater likelihood of death." Again, this is caused by eating animal flesh that has been blasted with antibiotics.

If this isn't a good reason to become a vegetarian, then forget it. There is a veggie burger which tastes as good as any hamburger and certainly much safer. Plus, red meat puts on pounds, yes, can make you fat! And sluggish. And possibly ill. You might even die.

Think about chickens They are cooped up in pens and crates, packed in so tightly that they cannot move or spread their wings. They stand in their own poop and if they can rest on their bellies, they do so in poop. They cannot help it. This is what man has done to them so folks can enjoy KFC. And it is in those conditions that these poor, overworked hens lay the eggs we enjoy for breakfast.

Yet, the FDA will do nothing, nor will the government that is supposed to protect their citizens. Instead, they protect the money changers since a lot of that money goes into their political campaigns. Yes, the government is in the pockets of greed.

Attorney Avinash Kar in a statement said, "This decision allows dangerous practices known to threaten human health to continue. Adding antibiotics to farm animals' feed, day after day, is not what the doctor ordered and should not be allowed."

But the Food and Drug Administration (FDA) and the rest of the Obama Administration, could not be less concerned about the well-being of American citizens.

Readers, please do not ever purchase "caged eggs." Inquire first. Get eggs only from farms where chickens roam freely. Also stand against factory farms in general, where the profiteers are responsible for horrific living conditions for the animals that they kill for our pleasure.

And think about this. Would you eat your dog? In China, one can pick out the dog they want for dinner at the restaurant. As they are seated, the dog is taken in the kitchen, hacked to pieces-while alive, then cooked and served. Surely we are better than that. Let us begin having regard for ALL creatures. We will be better people as a result.