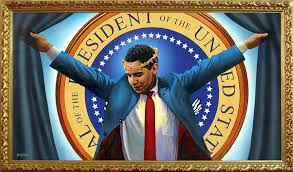 Yes, you read that headline correctly.

(Brief pause while readers pick themselves up off the floor.)

Despite immense criticism for virtually everything he has done, Obama has more than made up for his unpopular actions by popularizing the Fist Bump, a greeting without shaking someone's hand which is an action that can spread germs, especially during cold and flu season, which would cause Howie Mandel to panic.

Obama, who loves America (we know because he said so), wants to prevent the spread of germs that can make his subjects sick. This is admirable. The fist bump is the answer to those problems even though it was barely noticed until Obama demonstrated it as he greeted people on TV until it finally caught on, thereby saving America.

Knocking Knuckles (fist bump) instead of open caressed hand shakes (with nobody knowing where those hands have been), is the sanest thing The One has ever promoted. This is impressive.

History shows that the handshake originated back in medieval times when strangers would approach one another, then grab each others' opposite hand to be certain that the hand did not contain a weapon such as a knife. Then they would feel secure enough to talk to one another civilly.

Because of repetition and habit, this gesture would eventually become a friendly act when greeting a stranger. This was all well and good until the study of harmful bacteria and germs in general suggested that shaking hands was not a good idea since hands pick up disease-causing bacteria from door knobs, counter surfaces and the use of toilet paper which all becomes part of that handshake. Ugh!

Now we can all understand Monk, the TV detective with his idiosyncrasies and hysteria over anything appearing unsanitary. That is why his assistant brought packs and packs of hand-wipes to give him anytime he felt he had been contaminated. Wise man.

Thus cometh the fist bump to the rescue, which originated with the in-group, meaning those in a sub-culture amongst rock bands, groupies, Hollywood stars, pot lovers and professors, who have hop-scotched over social norms and created their own.

Hooray! Obama is preventing the spread of germs by bringing the fist bump into everyday life. Yes, he did something positive. History shall record this sacred moment which was documented by Associated Press on this day (7/28/14), with the headline: Study: Fist Bumps More Hygienic Than Handshakes.

Monk will rejoice as well as the nation as we all celebrate a good decision emanating from The White House in the midst of chaos.