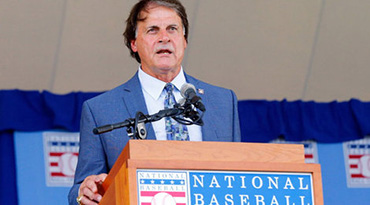 Tony LaRussa, who has been very much in the news lately, was inducted into the MLB Hall of Fame in Cooperstown, New York on July 27, 2014.

However, he is more than a baseball star. He is a genuine, caring, human being. When a young employee of his organization, ARF (Animal Rescue Foundation) died, LaRussa traveled to Brentwood, (Northern) California from Alamo for her funeral. This is documented as fact since I conducted that funeral.

Mr. LaRussa is also a star in the eyes of animals and those who love animals. This is taken from the forward of my new book, Angels Unawares – 4 Legged Ones, with the subtitle, What The Church Didn't Teach Me I Learned From my Poodle, which will be released on Amazon and Kindle next month"

There was an unknown cat that certainly became an angel to other animals. Tony LaRussa, former Oakland A's and St. Louis Cardinals' manager was in the midst of an Oakland A's game in 1990 when a stray cat wandered onto the field, halting the game, which the spectators loved, by the way.

LaRussa ran onto the field, scooped up the frightened cat and brought it to his home in Contra Costa County. He checked and found there was a major shortage of 'no-kill shelters' in that area.

So he and his wife, Elain, created their own by founding the Animal Rescue Foundation (ARF) in 1991. It is an outstanding facility located in Walnut Creek, California. (Thanks to Bay Area News Group and reporter Jeremy Thomas who wrote the story that provided this information.)

This cat, that they named, "Evie" who wound up on the ball field during a game and became a reluctant national celebrity, was the catalyst (newspaper term-good one) for this major animal rescue shelter.

She would certainly be considered an angel by all the animals that were sprung out of death-row where they were to be killed, simply for being – saved because of a cat named Evie, and an international baseball star who loved and loves animals.

This excerpt is from the forward of the new book, Angels Unawares-4 Legged Ones, with the subtitle: What The Church Didn't Teach me, I Learned From my Poodle. This book will be released during September, (next month) on Amazon and Kindle.