August 25, 2014
Does anybody know what Marxism REALLY is? You will be astonished to learn in the story below. Hint: The first thing Marxists do when they overtake a country is to make Christianity illegal, tear down the churches and forbid the name of God and Jesus to be spoken.

This is what Obama is bringing to America along with incredible promotion of immorality in our schools and society at large..Distinguished Columnist Kelleigh Nelson, whose extraordinary research skills uncover the most hidden schemes ever devised, writes for News With Views and has given us permission to republish this story 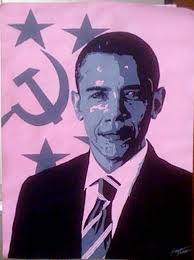 During one particularly beautiful spring day last week, while on my daily walk, into my head popped the verses from Ephesians 6:12 to 17. Why I hadn't thought of it previously was beyond me as it is so obvious. As a Christian I knew in my heart that those of us that love our nation, liberty and freedom and our constitution also know this verse, "For we wrestle not against flesh and blood, but against principalities, against powers, against the rulers of the darkness of this world, against spiritual wickedness in high places."

How profound this verse is for us today with the daily losses of our beloved America to the Marxist doctrines of the present administration. Is there any relationship between Marx and Satan? According to dear Pastor Richard Wurmbrand, you bet there is! Marx actually began his life in a God fearing family and claimed (as is documented) that he was a Christian. He changed somewhere along the way and had a deep personal rebellion against God and all Biblical and Christian values. He became a Satan worshipper who actually participated in occult habits and practices and even his bizarre hairstyle was part of his satanic beliefs.

Pastor Richard Wurmbrand, founder of Voice of the Martyrs was imprisoned in Romania for 14 years for his outspoken views against communism. He urged believers not to be duped into thinking Marxism was a political or economic theory or that Marx was in fact a benevolent believer in equality for all men. Marx's own statements expose him as a hater of God, and therefore, a hater of God's creatures, as those who have suffered under Marxism and Communism well know.

Dear Pastor Wurmbrand was tortured unbelievably for all those years because of his faith and his body marked the scars which he showed when he testified before the U.S. Senate Sub Committee on the communist exploitation of religion in 1966 in the 89th Congress. See: this and this.

It was in 1986 that he wrote the book, MARX AND SATAN and really told how the communists thought while torturing him and others that were tortured for their faith.

Wurmbrand says in his book that the Communists explained to him and others: "If we kill you Christians, you go to heaven. But we don't want you to be crowned martyrs. You should curse God first and then go to hell."

He says, in the prison of Piteshti, the Communists would force a very religious prisoner to be "baptized" daily by putting his head into the barrel in which his fellow sufferers had fulfilled their necessities, meanwhile, obliging the other prisoners to sing the baptismal service.

According to official Marxist doctrine, which is only a disguise, neither God nor the Devil exists. Because of this teaching, Christians are persecuted by the Communists. However, the Soviet newspaper of April 1974 reported that there were atheist circles in Red Latvia's schools. The children in the 4th through 6th grades were called "little devils," while the 7th graders were "servants of the Devil." In another school, 8th graders were called "faithful children of the Devil." It was forbidden to worship God, though Devil worship was openly permitted and even encouraged among the children.

The Orthodox cathedral in Odessa, much loved by the Odessites, became the meeting place of Satanists soon after the Communists came to power. They gathered also in Slobodka-Romano and in Count Tolstoi's former home. There were Satanist masses said by Deacon Serghei Mihailov of the treacherous Living Church, an Orthodox branch established in connivance with the Communists. It was a Satanic mass as a parody of Christian liturgy in which human blood is used for communion. Also in Odessa, a statue of Satan used to be exhibited in the Museum of the Athiests. It was called Bafomet.

If the Marxists and Communists were not Satanists, then why were priests and pastors compelled in the Romanian prison of Piteshti to say Mass over excrement and urine? Why, Wurmbrand asks, were Christians tortured into taking Communion with these as the elements? Why such an obscene mockery of religions?

If, in fact, true Marxism and Communism deny both heaven and hell, why in Romanian and Soviet Union prisons were nuns who would not deny their faith, raped anally, and Baptist girls had oral sex forced on them. Using Luciferian techniques, the communists made martyrs die blaspheming because of the delirium provoked by torture.

The depths of depravity of the communists in trying to force Christians to disavow their faith is beyond human understanding and can only be explained as being from "wickedness in high places."

Wurmbrand writes that Marx only once in all his works ever mentioned torture. Many of his followers were tortured by Russian Czarist authorities, yet Marx is usually described as a humanist, so one would expect him to write about such things as horror. However, his comment on same was that "Torture is productive, it leads to ingenious inventions." No wonder, as Wurmbrand says, that Marxist governments have surpassed all others in torturing their opponents. This alone displays the satanic nature of Marxism.

President Obama as well as Hillary Clinton considered Saul Alinsky their political teacher and high priest of left wing activism. In Saul Alinsky's infamous book, Rules for Radicals, in the very first page, Alinsky makes a so-called humorous comment about the book being for the first radical, Lucifer.

Ephesians 6:12 is clear that our warfare is against demons, against the "angels" that rose up against God and were cast out from the throne. And, as Pastor Wurmbrand makes so very clear in his book, MARX AND SATAN, they are truly one and the same.

I won't ever pretend to be a Bible scholar nor a teacher of same, but these verses are so plain for us today and for the battle we are in to save our beloved country. Verse 13 says, "Wherefore take unto you the whole armor of God, that ye may be able to withstand in the evil day and having done all, to stand."

These verses make it extremely clear that we are involved in a war, and that we must take up the weapons as every good soldier does. In this verse we are told to STAND...which is a military term for holding our position. In verse 12, the word "against" is used 4 times stressing the determined hostility of the enemy. We are confronting something that we cannot overcome except that we have invisible help to draw upon.

We can never ever underestimate the enemy...and although we are truly at war, it is a war to the death against foes that are supernatural, demons from the pit to be quite clear, and those who wish to have world control.

Verse 14–17 states, "Stand therefore, having your loins girt about with TRUTH, and having on the breastplate of RIGHTEOUSNESS, 15, And your feet shod with the preparation of the GOSPEL OF PEACE; 16, Above all, taking the shield of faith, wherewith ye shall be able to quench the fiery darts of the wicked. 17, and take the helmet of salvation and the sword of the Spirit which is the Word of God."

Ask any soldier what kind of emotions they go through during war, during time on the battlefield and you will get a range of emotions both mental and physical that will stagger the imagination. But we are told several times in these verses to STAND. We must hold our own as we fight the pressures of Satan and his demons and those of this world as well. We must have the solid convictions of our beliefs and our faith and take that STAND and not move from it.

The breastplate of righteousness is integrity, it protects the heart, chest and vital organs, and if we are to stand firm in the truth that we know, both Biblical and as free men, our hearts have to be protected. We have the truth of freedom and we have known liberty that God blessed America with back in 1787.

One must notice in this Biblical account of the Christian's armor that our backs need to be protected, and it is our fellow soldiers as well as our faith in God that watches our backs. Again, our battle is with wickedness in high places.

Marxism is present today in our government, in our congress, and throughout our country. As dear Pastor Wurmbrand so thoroughly documents in both MARX AND SATAN and his other widely known book, TORTURED FOR CHRIST, Marxism is a satanic entity and force from the pit of hell with the fiery darts of the evil one constantly on attack.

Can we win this war? Can we turn around over 150 or more years of Satanic plotting of destruction of this country? It looks impossible when one knows the full extent of the treachery that has gone on for so many decades to destroy and control us. Nevertheless, there is an abundance of strong and faithful believers in both God and freedom and our foundation is a Judeo-Christian one of the old and new testaments of the Word. It is really up to all of us that love America to fight the fiery darts of the evil one and yes, to take our STAND. May we be on God's side.

Photo Caption: Obama Under the Flag He Serves