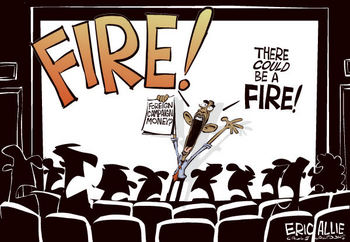 When can the brakes be applied to Freedom of Speech when that speech pushes people to cause destruction of property, rioting, looting and provoking the shooting of police officers, such as the two recently murdered in their patrol car in New York City?

The two New York police officers, Rafael Ramos and Wenjian Liu, who had done nothing to warrant it, were executed in their squad car without warning while the shooter, a recent Muslim convert named Abdullah Brinsley, yelled, "This is for Michael Brown and Eric Garner," two black men killed by police officers during their commission of criminal activity which made them, "Victims!"

So what about, "Freedom of Speech" as is declared so often? Does that mean people are free to use speech to instigate others to commit murderous acts? Is that a right? No it is not!

The Supreme Court long ago held that speech involving incitement, libel, obscenity, child pornography, threats and plagiarism are exempt from First Amendment protections. But somehow as society has evolved, all of that has been pushed aside as now everybody can do whatever they want with whomever they want to do it with whether their targets want to do it or not. They not only are immune from criticism but now one can be sued for not agreeing with the offensive behavior.

In discussions of The First Amendment and the limits of free speech, it is common to hear references to Justice Oliver Wendell Holmes's famous quote from Schenck v. U.S. 1918 – "The most stringent protection of free speech would not protect a man in falsely shouting "fire in a theater" and causing a panic."

It is a well-crafted line that certainly has a measure of truth to it, as for practical purposes even our most treasured freedoms can have justifiable constraints placed upon them in order to maintain order for a peaceful existence.

While yelling "FIRE!" in a crowded theater when there is no fire was never made an official law, it is time that it IS made law to apply to any speech, spoken or written that results [or] could result in harm, destruction and especially loss of life. The law principle of "Intent" can and just be applied.

According to Attorney Mark Mueser, who is running for the Sacramento State Senate in a coming run-off election, the defendant in the Supreme Court case was Charles Schenck the General Secretary for the Socialist Party in 1918, who had sent leaflets stating the draft was wrong while urging draftees to resist the draft. Schenck was charged with conspiracy to violate the Espionage Act which would result in harm to The United States since it would weaken our military.

Every civilized country must have boundaries and certain restraints upon activities in order to have a society with order. Without order, anarchy raises its ugly head pulling society into chaos, which we are now experiencing in America.

It was the hate speech of Morris Dees who runs the Southern Poverty Law Center who directed that printed speech at Tony Perkins of The Family Research Center (FRC), calling it a "Hate group" that directly resulted in a mental case storming the office with a gun and shot a guard, who still took him down. The intention he stated was to kill everyone at FRC. All because of the misuse of "freedom of speech" by Morris Dees and his Southern Poverty Law Center

IT IS WAY PAST TIME TO MAKE "FIRE IN A THEATER" A LAW AND TO ENFORCE IT WITH STRICT PENALTIES.

In the glow of that petition, as a citizen, I demand "Fire in Theater" charges to be filed against:

The Associated Press for running excessive news reports regarding the Ferguson, Missouri mayhem with black against white rioting, looting, and suggesting cops are all lawless and should be dead. They ran over 100 feature news reports stating that "A BLACK teenager, Michael Brown, was shot and killed by a WHITE police officer." That socialist news service constantly pitted blacks against whites, which caused increased riots.

"Reverend" Al Sharpton and "Reverend" Jesse Jackson (I choke and gag when I see that title falsely used by them). Their rabble-rousing (they call it Freedom of Speech) resulted directly to the race riots, and the murder of the two New York police officers, with others taking place at alarming rates. Those two "reverends" told their disciples to chant, 'What do we want?" (Response) "Dead Cops." When do we want it?" (Response),"WE WANT IT NOW." The desired results by the Communist sponsored agitators demands arrest and imprisonment.

The Southern Poverty Law Center led by Morris Dees who has used Freedom of speech to cause harm to all Christian organizations and Christians themselves, resulting in a shooting at FRC Headquarters in Washington, D.C. with the intent to kill everyone there. They are stirring up atheists, criminals and mental cases to declare war on the Christian church and communities.

Every reader should contact their representatives to demand that the 'Fire in Theater" law be put on the books and enforced. Yes, petitions. If we seize it into our hands rather than just letting it be, we can see an improved society. But we must stand firm with action.

CLOSING NOTE: Stay tuned for part 2 which PROVES the Communist connection and leadership of these race riots orchestrated to weaken America to make it easier for Communist leaders to swoop in and take command of the U.S. And it will not be as subtle as the stealth action to PLACE Obama in the Oval Office to assist in that very purpose. Check back.

Image Caption: Who is Yelling Fire in Theater?