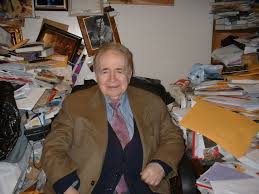 There were also interesting wannabe guests who made their bid for fame on his program, which always began with a ragtime piano version of "12th Street Rag."

His office, around the corner on 42nd street was constantly in such disarray that it might have qualified for disaster funds from the Federal Government. Piles of papers, letters and books were precariously balanced high on his desk and on the floor with filing cabinets so stuffed with information and 8 by 10 photos of guests and potential guests, that they stuck out over the top making it impossible to close the drawers. One time I dropped a piece of paper on the floor and quickly apologized for 'cluttering up his office.'

Yet, he knew exactly where every photo, letter, bio, or phone number scribbled on a scrap of paper, was located. Joe was an accessible personality whom you could call and talk to directly on the phone.

Many prominent people got their start on The Joe Franklin's Memory Lane show, including this writer, starting as a circus ringmaster who had received a lot of press, and later as a minister after becoming "Chaplain to Show Business."

This resulted in frequent appearances, sitting with such personalities as Eleanor Steber, the opera singer, Hermione Gingold, who starred with Maurice Chevalier in the film, Gigi, along with other films and had become well known as a regular guest on the Jack Paar Show.

Others I sat with were Elaine Stritch and movie star-dancer, Bobby Van, who, unknown to the public (but by me), was struggling with cancer that would soon take his life.

It gave me a high profile in New York which was helpful for a chaplain since the police recognized me wherever I went and would often be called by one of them on the street or coming in on a train at Grand Central Station who needed me for an unexpected situation that was occurring in the vicinity.

Going from point A to point B would often find me being detoured to duty. And some of those encounters were very intense, such as the young girl who tried to kill herself on a train coming into Grand Central Station, and a woman who was about to kill herself by jumping off the George Washington Bridge just as I approached it.

Joe had probably more hangers-on than anyone in show business who would frequent his office hoping that perhaps one day they would get their chance on the program, or even just wanting to feel a sense of importance by being in his company. His patience with them was admirable, but then again, he never put on any airs and was approachable.

The last time I spoke to him by phone (my daughter had run into him in Manhattan and he told her to have me call him, and gave his private number to her to give to me). He said he was writing a book and wanted some of the photos I had of some of the programs I did with him for the book. He no doubt was unable to finish it since cancer had invaded his body.

He was such a part of New York that it is hard to imagine the city without him. He set the pace for all the talk shows that followed. He is the one who created the format beginning on a local New York City TV station.

For me it is a personal loss since he was so much a part of my life and ministry during those early years. My first talk show appearance was with him. Over the years, thanks to him, I did all the major ones. It will take time to adjust to being in New York without him on the scene. Thanks Joe for the memories. RIP.