February 17, 2015
CAIRO 2/15/15) – While Obama plays golf and apologizes for America, the Muslims committed yet another atrocity aimed specifically at Christians.

Yesterday, Sunday, hooded Islamic terrorists took 21 Coptic Christians they had captured to the coastal city of Surt, a remote area, forced them to lie face down in the sand, and then with their knives, slowly sliced off their heads. Their victims, who had done no wrong, felt every stab in the neck and movement of the knives until finally, death became a welcome visitor. Some of the captives were seen moving their lips as if in a final prayer to God, Whom they served with all of their hearts. 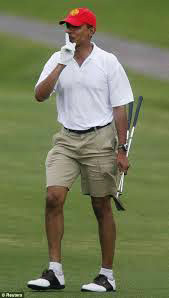 Hopefully this dastardly deed will not interrupt the concentration of the golf game Obama was enjoying on a luxurious golf course in Palm Springs, a luxury paid for by us, the taxpayers.

The Muslims have been empowered to attack Christians with impunity since Obama, a Muslim apologist, does the same thing on a regular basis, only without the knife. Indeed at the recent National Prayer Breakfast in D.C. he denigrated Jesus and misrepresented the old Christian Crusades. See that story by clicking on: http://www.renewamerica.com/columns/miles/150212

He will not lift one finger or interrupt one golf game to protect Christians or America itself. He has demonstrated this continually. He will not intervene for any Christian held hostage by Muslims nor does he want any Christian to come to America for political asylum.

YET, he recently gave immediate assistance for a sexually confused LGBT misfit with AIDS to enter this country and stay here. He is also quick to allow a partner of any LGBT individual living here to 'come on in.'

His administration has made it illegal for military chaplains to speak the name of Jesus in military chapel services, even during funerals, and demands all symbols of Christianity be covered when he speaks at a Christian school or university. Under the Obama administration, immorality is taught in our schools, but God and goodness is not. Something is very wrong with this picture. And America is paying a huge price for his disgraceful conduct as well as we the people for letting him do it.

Then to top it off, a high school student in Florida, who was given the task of making announcements over the school public address system, closed his announcements with: "And God Bless America." That created an OUTRAGE by...one atheist student, who made a complaint to ALCU.

For that, the student announcer was hauled into the principal's office, since the Communist legal arm demanded it, and this 'offending student' is facing suspension. It is this kind of thing that verifies Obama's fingerprints on those knives used to kill Christians. Since the so-called 'leader of our country' openly expresses his contempt for Christianity, which empowers our Islamic enemies, then HE is responsible for these inhuman executions.

During the Clinton Administration, I went to a government meeting in The West Wing, with the National Association of Evangelicals. We were there to ask assistance to help free a Christian political prisoner who faced execution and to allow him to come to America for political asylum.

The U.S. government official, who was in charge of religion issues in America, spoke with such a thick foreign accent that we had to listen carefully. It was obvious that [had] he been born in America, that accent would not have been so heavy, if at all. How did he get that position?

When he was asked by us to help free that pastor, the government leader told us that we needed to gather and present documentation. "Den if a case can be made," he uttered rolling is r's, "ve can trrry to do some-ting."

He used that same line three times during our meeting even though we presented news clips documenting this abuse. Needless to say, not one thing was done to help this imprisoned pastor in a foreign land. Nor was there any intention to do so.

Obama fans the flames of Muslim hatred toward Americans, especially directed at Christians. He publicly misrepresents the old Crusades calling them as aggressive acts to force Muslims to convert, which is a lie. The Crusades were a RESPONSE to continual Muslim attacks over a period of 485 years. But Obama carried that yarn to the podium of the National Prayer Breakfast in Washington, D.C .which was watched world wide.

And THIS is what the Muslims yelled while beheading the 21 Coptic Christians in Libya: In the video, an English-speaking terrorist said, "Safety for you crusaders is something you can only wish for." Notice how the word Crusader is used by Muslims, to show that we are clearly the enemy since we attacked Muslims to force them to become Christians – that is what they have been taught. Obama is responsible for this negative view of Christians. I blame HIM for the butchery of those 21 Coptic Christians.

What is more, suspicion suggests that Obama is using our tax money to fund the ISIS attacks. It is already documented that the imposter in the White House has generously funded Hamas and the Islamic Brotherhood through Valerie Jarrett. You will see the amounts at: http://revaustinmiles.com/index.php/more/688 An investigation of that possibility is now underway by another source who may be on to something.

WAIT! Obama is ordering the U.S. airstrikes of ISIS command centers. Notice that this fraud will NOT send ground troops to the troubled areas. BUT, saith he, American troops will go there to TRAIN AND EQUIP Muslim fighters to "protect their own territories." Yep, sure! This is a cleverly thought out ruse since most of these 'freedom fighters' will take their expert training and equipment to depart and fight with ISIS against us, even though one or two might, upon completion of training, turn their weapons toward the very American soldiers who taught and equipped them, with U.S. taxpayers footing the bill.

I blame Obama directly for these murders against Christians. He is the one who's own hatred of Christianity has been shown and spoken publicly that has lead directly to those Coptic murders and a string of others. Yes, I am outraged. Coptic Christians, are among the original churches after the resurrection of Jesus. These are all our brothers and sisters... OUR family, that is being brutally executed. They are the most sincere, devoted loving Christians of all. Perhaps it is time for another Crusade.

Every reader should contact their representatives, state and national, to demand that the traitor in the White House be removed. And we must also re-dedicate ourselves to God and spend as much time in the Bible and with Him in prayer as we do watching TV. Here is why the chaos is increasing:

Obama has brought us into sin along with the ruination of our country. He has broken down traditional families to push for "modern" families, cruelly murders babies in the womb if they are inconvenient to their mothers or fathers, labors at getting rid of God or any mention of Him. These evil deeds perpetrated by a Marxist has brought God's judgement upon America.

One way God's wrath is poured out, as stated in scriptures, is through our enemies. Note how powerful those Stone Age enemies have become.The reason? God has withdrawn His Hand of protection from America, that is why all hell is breaking loose. Judges 2:11-15

Even our weather and planetary system is not working in the perfect order it once did. And today there is evil without purpose, simply evil for the sake of evil, which can only come from Satan who is playing his last hands of cards.

The ONLY way we can have God's Hand of protection back on us and our country is to return go God. The clock is ticking – the time is coming to a close. You can stop this chaos or let it happen. It is entirely up to you-me – US.

But those whose hearkeneth unto me shall dwell safely, and shall be quiet from fear of evil.