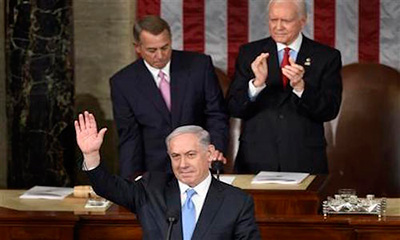 WASHINGTON, D.C. (3/3/15) – All America should feel profound disgust with the way Obama snubbed Israeli Prime Minister Benjamin Netanyahu during his visit to the U.S. today to speak before the Joint Session of Congress, where 56 democrats refused to attend.

Those who did, like Nancy Pelosi, showed no trace of dignity as a government official. Indeed, while Mr. Netanyahu spoke, she would make faces, turning in her seat to make sure all saw her 'demonstration' and when people applauded him in one of many standing ovations, she turned her back on him and gestured 'in disgust" to the attendees, making sure she made her point.

She acted like a piece of trash – messy, uncouth, uncivil and trying to take attention away from the speech to bring the attention to her. She displayed a huge deficit in manners, respect and general decorum. Senator Dianne Feinstein made matters worse by stating that "Netanyahu does NOT speak for me." That duo of witches brew makes America look like an ignorant third world country with no running water or schools.

I am embarrassed by the conduct displayed toward a distinguished world leader, whose speech was very respectful of the U.S. and to Mr. Obama who in turn refused to even meet with him while in D.C. Even the simplest common courtesy would dictate that any guest in D.C., especially one, who, along with his country, Israel, has been the best ally America has ever had. It is not unreasonable to expect that all hospitality would be extended.

Instead, we all looked like ignorant backwoods uneducated knuckle heads. Our "representatives" should at least attempt to exhibit more class than that. This was a foreign dignitary who should have been welcomed. There is a bright spot in this; it was a joy to see a REAL leader address the people with firmness and resolve. How I wish that we had a leader like him who stands for what is right for his people.

Obama is not an American. He was born in Kenya as Barry Soetoro and was raised Muslim. When he was confirmed as a Muslim, he, like everyone who follows that ideology, must take a Muslim name. In this case, he chose, Barack Hussein Obama.

When he managed to become a State Senator after entering the U.S. as a Foreign Student, the newspapers in Kenya reported with glee: "Barack Hussein Obama, who was born right here in Kenya...one of us...has been elected as an Illinois State Senator in The United States." Wow!

That newspaper had many other documents of Obama including his legitimate birth certificate which we found. Shortly after we did find it, they scrubbed it from the newspaper website. Too late. We saw it.

From a young age he was GROOMED to be a major player in the Islamic world plus he had been groomed also to be a communist and when this campaign for him to be "president" of the U.S.A. began, he was sponsored by the Communist Party USA (CPUSA) who would use him to be the final spike in the coffin of America.

Israel has stated that they will do everything possible to prevent a nuclear attack by Iran, but there is a deadline before they work to take out their compounds that have stored up the ingredients to build an arsenal of nuclear bombs capable of reaching the U.S. and every country in the world as they seek world domination.

So what does Obama do? Hold on to your seats. Obama has stated that if Israel attempts to send war planes over Iran to take out the compound that he will order U.S. jets to fire on the Israeli planes....yes...to shoot them down...our allies who only want to protect its people and their country. But as Obama stated publicly, he will always stand with Islam.

The latest nut-head ruling by Obama is to order that all pregnant children without their parents who illegally cross the borders must be referred to abortion factories such as Planned Parenthood by the church groups that reach out to them as well as all other charities.. These abortions will be paid for by our tax dollars. That one was slipped through in the dark. Obama is evil and should have been taken out of the Oval Office long before now. To see the whole story of this current action go to: http://www.prolifeblogs.com/articles/archives/2015/02/obama_tells_fai.php

Now, the real kicker: Have you noticed how Obama has become a dictator? The people make the laws, but Obama stands ready with Executive Privilege to throw out any law the citizens have voted for and only create and put laws in place that protects and furthers his agenda.The people have NO say in government which is the antithesis of the Founder's intentions and a violation of The Constitution.

Look at his recent actions: threatening to shoot down Israeli planes that try to protect their country from Iran whose leaders have stated their determination to annihilate Israel and kill all Jews. He wants to murder all babies in the womb. He wants to rule with an iron fist, having been totally groomed over many years of careful, patient work, that has brought him to this point.

Obama was NOT voted into office. He was PLACED there by the CPUSA after years of infiltrating the congress and senate chambers with both Communists and Islamists. They managed to rig voting machines and masterminded other fraudulent votes, by the hundreds of thousands.

Obama and the CPUSA were so sure of this, that Obama paid one million dollars to secure Grants Park in Chicago to stage the Election Night Victory Celebration of 2008....but...that deposit was made MONTHS BEFORE the election. So it was a done deal. He was NOT voted in.

Brace yourselves. If Obama and the CPUSA attain their goals, they all fully intend to cancel the election of 2016. At the very beginning of that year, Obama intends to use Executive Order Privilege to declare himself President (dictator – emperor) for life! That is the exact plan at this moment. If we keep snoozing, watching TV and allow this, the final election in America will have taken place.

Meanwhile, may I as an American Citizen profusely apologize to you, Mr. Prime Minister, for the snub in Washington D.C. today. Let me assure you that the majority of American citizens support you and Israel. Obama does NOT represent us or our country. He is not even a legitimate president.

"America is like a healthy body and its resistance is three-fold: Its patriotism, its morality, and its spiritual life. If we can undermine these three areas, America will collapse from within." Joseph Stalin.