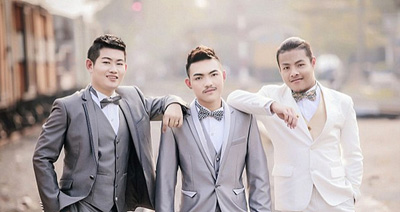 LONDON, ENGLAND (3/12/15) – There was no lack of it being foretold. We could all see it coming when the homosexual lobby pushed to redefine marriage, from between a man and a woman, to between same-sex companions and any other combinations that can be concocted.

The Daily Mail reported today that not two, but three (three-count'em) homosexual men "married" each other in Thailand. The trio "wed" under Buddhist law due to Thailand's marriage restrictions. Let's give a quick hoorah for Buddhism. This will no doubt trigger massive conversions.

The paper reported that the three homosexual men, Joke, 29, Bell, 21, and Art, 26, exchanged their vows in – now get this – a fairy-tale ceremony – at their home in Uthai, Thani Province, Thailand. This was from the London News Account NOT a MilesTone observation.

According to one of the grooms, Joke – yes JOKE that's his name, "same-sex marriages are just as valid as any legally sanctioned ceremony and are treated as such." He went on to say: "Now Thai society has a better understanding of sexual orientation as many same-sex weddings appear on TV, newspapers and social media, we feel more accepted and able to come out." And that is exactly the point of these TV shows and movies.

One of the twinkling trio, Art, stated this about the historic occasion in LGBT history: "Some people may not agree and are probably amazed by our decision, but we believe many people do understand and accept our choice. Love is love, after all." " Love after all," is a legitimate statement. Monogamy in homosexual relationships is not. They are indeed, after ALL.

This is now a legal homosexual menage a trois. And they will all receive benefits accorded to (legitimately) married couples in countries like The U.S. Let's cheer this triumph for Progressivism. The Rainbow Flag is flying high. What is even more telling, the responses to the story in The Daily Mail were mostly supportive of this latest body grab of the gay Gestapo.

Over the years I have seen marriage certificates (that the State declares is mandatory for any legitimate wedding) change identification boxes from Bride and Groom, to Party One and Party Two. I can hardly wait to see what the next state marriage licenses will list.

Normally I would go out for a long walk after receiving something like this, but am still recovering from serious injuries from a fall during a walk two weeks ago. So I'll just stay put and read philosophy books.