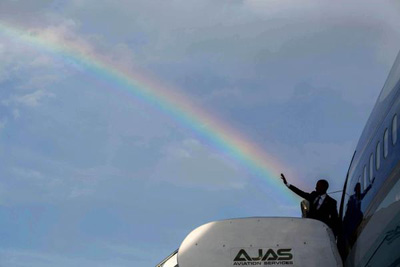 SACRAMENTO, CA. 4/13/15) – Obama displays agile dexterity in enabling our tax money to trickle through his fingers like a mountain stream, not to improve our country and meet the needs of citizens, but a cascading waterfall of money to benefit his personal desires, greed, and to fulfill his agenda of destroying America. He is ready to promote and with our tax money, fund transsexual surgeries

A California inmate serving a life sentence for murder, Jeffrey Bryan Norsworthy, has taken a bizarre case before U.S. District Judge Jon Tigar in San Francisco, who ruled that denying the sex-change surgery to the inmate is a violation of constitutional rights. How's that again?

First of all, anyone who commits the crime of murder has forfeited all rights by his crime against humanity. Period!

An attorney for the Transgender Law Center in Oakland said: "The state provides essential medical care to all people being held in prison and Michelle (the new girly name for the murderer) should not be an exception just because of who she is." Strangely, the Associated Press refers to the inmate as SHE or HER even though he was born male and has male genitalia.

And how much will taxpayers pay for this surgery? We will pay $150,000. A second sexual misfit, Bradley Manning in the U.S. Army, an openly 'gay' serviceman was given a high security clearance to manage files detailing our military strategies. Big mistake. He made a disc of the files and gave them to the Communist controlled media to publish our military secrets. This traitorous action has put our troops in danger, while giving comfort to the enemy.

This is treason . Yet, he too is demanding that Obama pay for his sex-change surgery so he can flit about in high heels pretending that he is a woman who is now referred to as Chelsea.

While the government is using our tax money for this perverse frivolity, U.S. Military Veterans are not being served in V.A. Hospitals because of lack of staff. Many wait for months to even be seen by a doctor when they return from active duty with mental and physical disabilities. Many have died waiting for an appointment.

More staff needs to be hired to care for our veterans who have given their all, coming home with severe wounds, some with missing limbs due to their military service to defend us, and then dying before even being able to see a VA doctor because of lack of staff to coordinate their appointments.

Yet, Obama can toss out over $300,000 in just these two instances which serves no useful purpose but to assist two mentally impaired misfits in a fantasy world of living the life of a different sex. The money should be used to help hire extra staff, and to assist homeless veterans who are suffering on the streets of America.

Then this news just broke, now hold on to your seats: Puerto Ricans can now get disability social security payments, from our tax money, because they speak Spanish. Yes, you read that right. The logic behind this is that many Puerto Ricans do not speak English. Well DUH!

These disability benefits are given because, as Obama explains, they have an inability to communicate in English. This tossing our money to the Puerto Ricans came into being in 2014 by Executive Orders from and by Obama.

This is the same Obama that says Social Security funds are dwindling down to the point that the government may not be able to continue this program, to qualified recipients that is.

Millions of those who WORKED to support their families and paid into that forced social program will, in the near future, be cut off from the funds that they had earned for all their working lives, paid to the government so they would receive a pension in old age after retirement. But our pensions instead will go toward supporting those who do not work.

Again, Social Security is not a government handout to us. This is a pension paid for by working Americans to help care for us in old age. Now it will be taken from us and given to non-citizens.

Obama is stealing that collected money to give to all aliens who come to this country illegally. This money is going to over 11 million who have barged through our borders in order to benefit themselves to the tune of $1.4 TRILLION in payouts. All they need to do for this is to vote for Obama.

That amount of money could provide proper medical care for injured veterans who return home, plus could build housing for the thousands of homeless veterans on the streets, which should never be.

To make matters worse, Obama is now flying in thousands of foreign young people, yes paying their air fare to The United States from Honduras, El Salvador, and Guatemala, where they will join over 11 million others already in this country illegally. These new ones will be greeted, put on welfare, food stamps, given free housing, schooling and all medical care while veterans on the streets have nothing whatsoever, and their food is a day by day challenge.

Meanwhile, the Americans who break their backs working all their lives to support their families, pay for schooling for their children and pay their doctor and dentist bills, will in return, pay for these Obama benefits to those who have not earned them.

In his zeal to bring these future Democrat voters into America at the expense of those who work, Obama has invited those who have been deported to come back to avail themselves of this all-expense trip to the U.S. and as has been reported, this includes convicted felons. Just what we need.

The Obamas have spent around one billion dollars on lavish vacations around the world, and using Air Force One as their personal taxi. Air Force One should only be used for the business of America or to meet with world leaders, not for their personal luxury, finding new places to play golf, or personal promotion and fundraising for himself.

Also to be considered are the millions of dollars Obama gives to promote the homosexual agenda, making them a protected class, dictating that all citizens must promote their deviant lifestyle which God declares to be sin. Plus, Obama is financing the push to have homosexuality taught in the public schools, beginning in Kindergarten. That is money taken away from assistance to veterans in order to promote his immoral agenda. Obama is the pot at the end of the rainbow.

This is only a brief look at the reckless spending for the personal enrichment of a non-American citizen, not born here, who was NOT voted into office. I know of only ONE person who actually voted for that imposter, and he posted a story that he so much regrets doing so.

Obama is wasting a fortune on his follies as veterans struggle. In America, there should not be even ONE veteran who is homeless out on the streets. There is plenty of money to provide housing where they can get their lives back together and be active in any community where they live. We owe that to them. But Obama is squandering that money on himself.

The first step is to remove Obama from the White House. Why has he been left alone to commit the greatest fraud in history upon America?

Readers, arise, contact your representatives and demand that Obama be escorted out of the Oval Office NOW!

Please do this BEFORE he succeeds in destroying America completely, which is the precise reason he was PLACED into the Oval Office, not voted in.

Rev. Austin Miles is a veteran, having served during the Korean conflict. After being exposed to Mustard Gas, his life was never the same.

Photo Caption: Obama the Pot at The End of The Rainbow