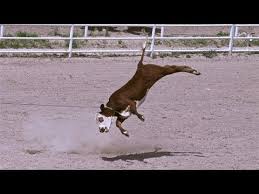 SALINAS, CA (7/27/14) – The Salinas Valley is known as The Lettuce Bowl, the former home of author John Steinbeck, a setting for the movie, East of Eden starring James Dean and also for their rodeo each year which is one of the top 20 regular season rodeos in the U.S.

They boast that "The Salinas event draws over 700 of the best cowboys and cowgirls across America to compete for almost $400,000 in prize money and the coveted gold and silver Salinas belt buckle. The four day event draws over 50,000 fans to the Salinas Sports Complex each year."

The classic American rodeo is a featured event throughout the land. Filled with the sounds of, "YEEEHAW," "EEEHAAAA," along with screaming and fan excitement, the adrenaline runs high as this Man against Animal Contest rips off to a roaring start. Even so, it is a contest where man has the distinct advantage over a confused animal.

These cowboys like to exhibit their prowess by demonstrating strength and superiority over animals that are not mentally equipped to deal with these public spectacles which often result in severe injuries to them. But these cowboys mistakenly believe that roughing up animals prove their masculinity by subduing lesser creatures. On the contrary, it does not.

While some parts of the rodeo may be a noble contest, one portion is anything but noble or even acceptable to most, except for those who are oblivious to the feelings of animals. That is the calf roping event, where the calf is turned loose as a man on horseback thunders after the frightened animal running full speed across the arena when the cowboy lassoes the little calf with the rope tightening around its neck, then bringing his horse to an abrupt stop causing the rope to tighten around the neck of the calf yanking it backwards so violently that the calf does a somersault, landing heavily on its back, leaving it with rope burns on its neck.

The cowboy jumps from his horse and wrestles the calf to get its feet up in the air where he ties the rope around its legs, then jumps up with his hands in the air triumphantly as a symbol of victory, hoping this was accomplished in the number of seconds allowed for the conquest. The little calf on the ground is in severe pain, many times with broken bones.

Last weekend, July 18th, the Salinas rodeo was taped for a San Francisco TV station. What was seen in that clip outraged viewers. One little calf had been lassoed and yanked into the air with that rope causing damage to his neck in what had the effect of being hanged. It was so violent that when the calf was untied, then forced up to its feet. He could only balance on three legs. His front right leg extended straight out with a curve in that leg which was severely injured, in all probability broken, as it tried to hobble away. This image will forever be in my mind. And this is considered, ENTERTAINMENT??

The next calf roping was even worse. That little calf, running for its life was overtaken by the horse and rider. For some reason the rider cued his horse to get directly behind the calf, running it over, leaving it rolling under the feet of the horse that crushed every part of the innocent calf's body as it rolled helplessly under the horse's pounding hooves.

The rodeo states that it has a veterinarian on the scene ready to take care of any injured animal. BULL EXCREMENT! I did not see one person come to aid the little suffering calf with the broken leg that he held out in front of him. Nor did anyone come to the other that was trampled under the feet of a horse. Nor a horse that had been injured and was on the ground.

A calf is gentle , friendly and can bond with people who care for it. A calf has the same emotions as us, feeling fear, anxiety, pain, love and excitement. And their little bodies are broken for the amusement of spectators at a rodeo. This is savage!

This writer is not against rodeos or cowboys. They are an American tradition. Riding a bucking bronco or steer is a legitimate contest along with barrel racing, lassoing exhibitions on the ground and while standing on the back of a horse. This is a proper spectator sport. If a cowboy is injured when tossed from a horse or bull, then so be it. He is the one that instigated the situation that led to the injury. The animals have never instigated any of this.

But we are STRONGLY opposed to calf roping which should be made illegal, and will be. Violently taking down an innocent little calf that has done nothing wrong, causing it intense suffering from broken bones and rope burns on its neck while spectators cheer is totally incompatible with a civilized people. Animal rescue organizations should be alerted.

The Roman Coliseum days should remain in the past. People, we are much better than this...at least I would hope so. 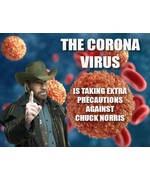