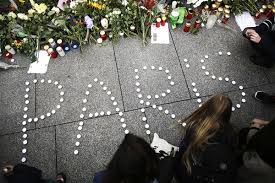 "God, we know that you are all powerful, yet we worry." Included in a prayer given this morning by Fil Falciglia, the worship leader of Antioch Covenant Church, (11/15/15).

Yes, we all are worrying, since the Muslim attacks in Paris yesterday. Thanks to distracted world leaders, Muslims now boldly push through the borders of countries and set up shop to terrorize and kill citizens while working toward a world caliphate.

As they crashed borders, we saw a current video showing them yelling the phrase of Muslim conquest, "ALLAH AKBAR!" This is the cry of Islamic victory. Once in those countries, they take over sections of the main area that is off-limits to citizens, establish Sharia Law and then set up training camps to prepare an attack in the country that took them in.

While America snoozed, they have accomplished the same thing here, setting up training camps that no citizen can enter as they prepare to demolish us. Why do intelligent countries obey this 'no enter zone' for Islamic terrorists with a history of murder and destruction, not counting stealing and the rape of children? Should not these camps be monitored? This is nuts. Why allow these training camps in the first place?

Foolishly, the countries where this has been happening, have taken the bait "to help poor displaced refugees." Yep, this shows we all have a heart, doncha know. Why, it's the right thing to do by golly.

A passport taken from the body of one of the Paris terrorists, showed that he was one of those, "poor refugees," that forced his way into Greece with a mob, and from there was able to get to Paris where the attacks upon citizens who took pity on them, was carried out.

So was there really 72 virgins there awaiting the attackers, to reward them with an eternity of sexual bliss? Does this mean that the god Muslims call, Allah, is an immoral god? Many of the young Muslims who die in suicide attacks, as 'martyrs,' have wives or girl friends. Would this not be a slap in the face for them? Wouldn't this be considered sexual misconduct? And their 'god' is encouraging this by supplying the girls as an inducement to commit evil?

The Christian God is a moral and just God who would never condone murder as stated in the 13th Commandment, where the word (shalt not) "kill"was used. In Hebrew, 'kill' means 'MURDER.' It is for sure that He would never condone or encourage sexual misconduct which is a sin for Christians.

Furthermore, there are numerous prophecies in the Old and New Testaments, most which have been fulfilled. A couple others, including the return of Jesus to the earth, has yet to be fulfilled, and it WILL be. Sooner than anyone thinks.

The prophets predicted the Islamic attack on the Twin Towers in New York which can be found in Deuteronomy 28:45-52. Read it carefully. He also predicted that Ishmael, the son of Hagar the Egyptian slave girl that invited Abraham to father her child, would be, "...a wild man; his hand will be against every man; and every man's hand against him, and he shall dwell in the presence of all his brethren." And thus the Arab race began. Genesis 16:11-12 It all started by the lack of faith and sin of Abraham.

What has been done in Paris and around the world is evil. That is a term directly connected to Satan, who corrupts as many people as possible to do his evil work. This has been the goal since he was kicked out of heaven. And this is the source of evil that is seemingly covering the world today. And THIS is who the Muslims have chosen to follow?

Even though the Islamists will not receive the inheritance promised them, many of them have already realized that the promised 72 virgins to welcome them do not exist.

With an intruder in the White House being another 'refugee,' calling the shots, America, on the way to becoming the present day Sodom and Gomorrah, is being led down the path to hell, having been manipulated to turn away from God to live a life without morals or responsibility.

This has resulted in sexual perversion, the murder and dismembering babies in the womb, who can feel every horror being done to them...all so that the mothers cannot be inconvenienced by...being a mother. This along with dishonesty, cruelty and lack of ethics has about doomed us.

Before the destruction of Sodom and Gomorrah, Abraham tried to negotiate with God by asking, "If 50 righteous men can be found, will you lift your hand from destroying the city?" The Lord said if there were 50 righteous men in the city he would spare it. With skillfully haggling with God, he managed to get the number down to 10 righteous men and God agreed to spare them.Genesis 18:23-33

There are many, many more righteous people in America than Abraham found in his land. These people must rise up and take a firm stand for God and then, and only then, will God's hand be back upon the people of America. This will take a lot of prayer, more commitment to God and the churches and then, as God made clear, "I will never leave thee nor forsake thee." Joshua 1:5

As for the Muslims, never have I seen a people more devoted to their religious beliefs. They center their entire lives on their religion. They pray five times a day, no matter where they are, and this is physical prayer, getting on their knees and putting their foreheads against the floor, come back up, then down again. They are a very dedicated people. And they never hesitate to praise Allah.

Sadly, they have all been misled. About a million Muslims a year, are leaving their faith and families behind, to follow Jesus who appears to them in such vivid dreams they can do nothing else but quickly leave home with only the clothes on their backs to go and follow Him.

God, left us the Bible for the world to see the true God, and states that Jesus IS the way, the truth and the life. Nobody comes to the Father except through him. John 14:6.

The Muslims, who viciously cuts off the heads of those they do not like, and do it with happy smiles on their faces, are also mentioned regarding the final judgement.

Indeed, Muslims are the ONLY group of people who continually carry out this bizarre cruel death. And this is stated in Revelation 20:4: "And I saw thrones, and they (Muslims) sat upon them, and judgement was given unto them: and I saw the soul of them that were beheaded for the witness of Jesus, and for the word of God, and which had not worshipped,the beast, neither his image, neither had received his mark upon their foreheads, or in their hands; and they lived and reigned with Christ a thousand years."

Yes these Christians, whom the Muslims beheaded, will rule them for a thousand years. Then, the trapdoor to hell will swing open under their feet and each one will be plunged into flames that can never be extinguished. And they will be screaming when it happens.

Let us all go on our knees for fervent prayer for our country, and for the Muslims to be delivered from the deceit that has them imprisoned and their future doomed. If we begin this now, perhaps that will stop the intended next target for ISIS – The Super Bowl Game.